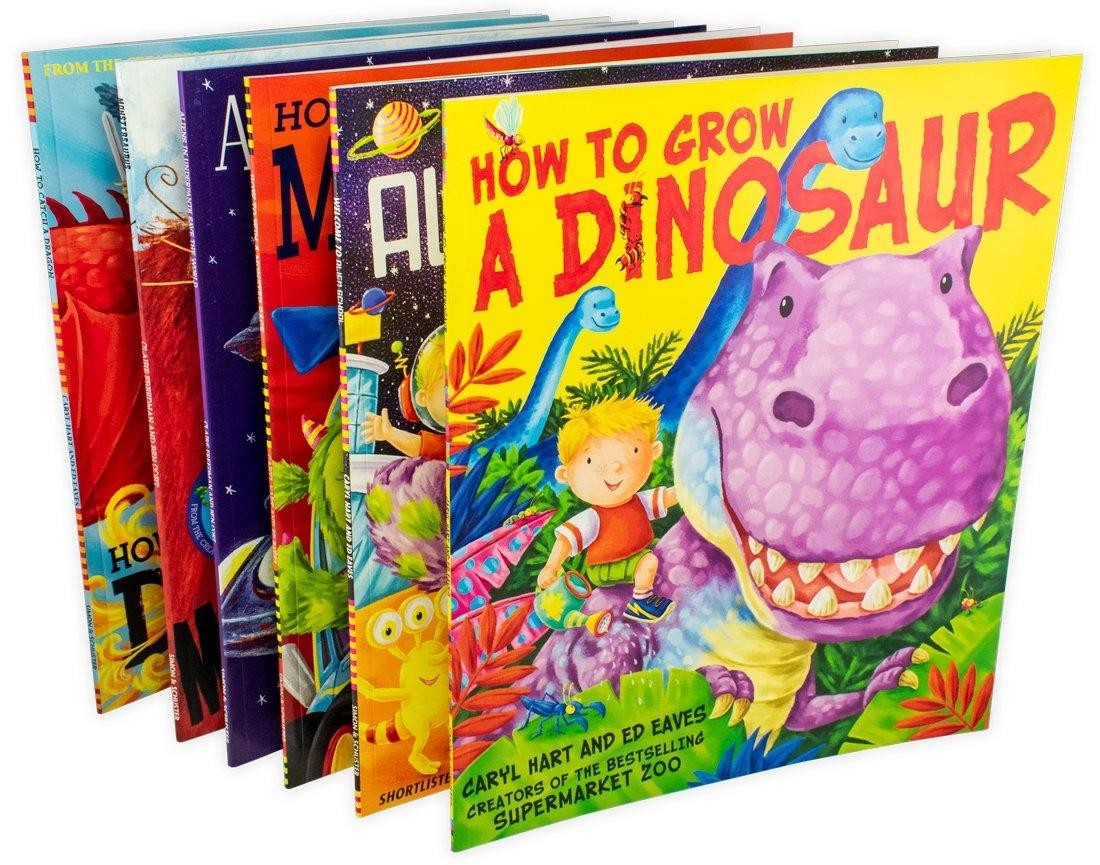 Titles in This Collection:

When, one morning, Mum calls Albie for school, he really doesn't want to go, He's too busy playing space rescues with his toys. But, when Albie steps into the playground, he quickly realizes that this isn't any old school. It's Alien School and there's a big, shaggy alien heading in his direction! Join Albie as he makes intergalactic friends, enjoys space-ghetti at the school canteen and rides on space scooters - school has never been so much fun!

How to Win a Monster Race

Albie loves playing with his toy cars so when he finds himself in the middle of a monster grand prix, he knows exactly what to do!
Another fantastically fun story from the bestselling team, Caryl Hart and Ed Eaves, behind How to Grow a Dinosaur and How to Catch a Dragon.

Aliens in Underpants Save the World

It's lucky that they do,

For pants helped save our universe,

Sounds crazy, but it's true!

Aliens in underpants are back - and this time they are on a mission to save the world...

Monty LOVES inventing
But things don't always work -
His walking toaster ran away
And the robot went BERSERK!
But then one day Monty found a book with instructions on how to create inventions very rare... read it if you dare!

How to Catch a Dragon

Albie's trip to the library soon turns into a fun adventure with his new knightly friend. On their way to find some dragons they meet trolls, bears and a mysterious many-headed monster. Going to the library has never been so much fun!

How to Grow a Dinosaur

Albie is a normal little boy who has extraordinary adventures. When he helps his mum in the garden by planting some seeds, he can't quite believe his eyes the next morning. The garden has grown beyond all belief and these are not just any old plants - oh, no - Albie's seeds have grown into great big jurassic jungle! He rushes outside to discover what else has grown - a fantastic mix of real live DINOSAURS! A colourful, funny follow-up to Supermarket Zoo.

Everyone loves hugs, and there are all sorts in this book... There are hugs for wrigglers and hugs for gigglers, hugs that are tickly and hugs that are prickly. But will you find the perfect hug? Of course! Because as this book shows, there's a perfect hug right under your nose!

Keith the Cat with the Magic Hat

Keith is not your average cat. Keith is a cat with magical powers - or at least a magic hat. But when one day, Keith loses his magic hat he discovers that magic is still possible. A fabulous feel-good story with another endearingly crazy character from Sue Hendra.

Barry the Fish with Fingers

Fish come from all over the ocean to see Puffy the Puffer Fish's amazing bubbles. Big bubbles, small bubbles, square bubbles . . . they've never seen anything quite so amazing, that is until Barry arrives on the scene. Barry is a fish with fingers and he's going to put them to good use. The fish are amazed. Life under the sea will never be the same again . .

Doug The Bug That Went Boing

Doug and Trevor are best friends who love playing in the garden. But one day Doug gets dug up! Stuck at the top of a tower block can Doug find his way back to his friend or will he be trapped forever

No-Bot, the Robot with No Bottom

Bernard the Robot loses his bottom on the park swing, and sets off to find it. Every time he gets close, it disappears again! Bird was using it as a nest, but it was too heavy; Bear used it in his drum kit, but it was too tinny; the Squirrels built sandcastles with it...and now it looks as if they're sailing away in it. Will Bernard EVER get his bottom back?

When a lost Mammoth unexpectedly arrives, Roo makes a wonderful new friend. But he also has to make a very difficult decision.

Daisy is eating her breakfast when a big purple rhinoceros strolls into the kitchen - just like that! Then it takes a bite out of her pancake - just like that! Daisy tries to tell her mum and dad, but they're much too busy to listen. They're always too busy to listen. So Daisy starts talking to the rhino instead
PostTweetShare Share with WhatsApp Share with Messenger
Community Updates
Books2door DealsBooks2door Discount Codes
New Comment Subscribe Save for later
4 Comments
22nd Jan
Some really good books there, well worth £11.99
22nd Jan
9.45% cashback from quidco
22nd Jan
Albie....
22nd Jan
Thanks for this, ordered a few sets. Can't wait to read them to the little one.