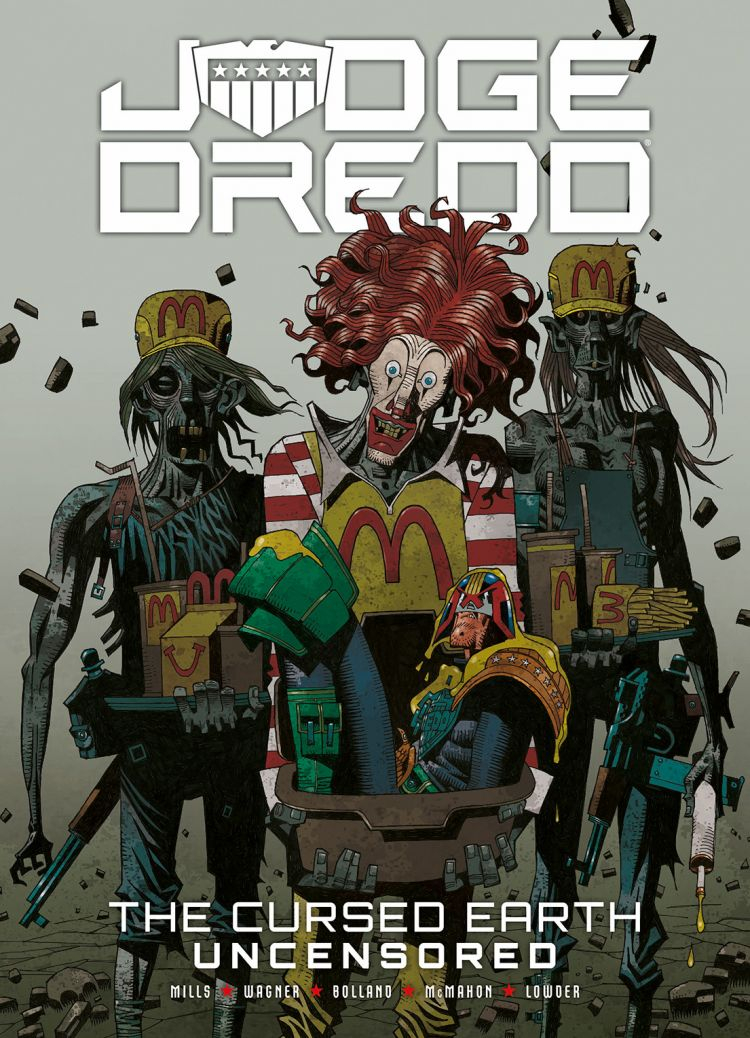 It was the collection they said could never happen – but the classic Judge Dredd epic ‘The Cursed Earth’ is now uncensored and with ‘banned’ episodes restored!

In 1978, 2000 AD publisher IPC undertook to never reprint key episodes of this sparkling action-packed epic by Pat Mills, John Wagner, Brian Bolland, and Mick McMahon, as they featured parodies of trademarked characters such as Ronald McDonald, the Burger King, and the Jolly Green Giant. Subsequent reprints of the story omitted the episodes.

But now, thanks to changes in parody laws, Rebellion is delighted to be able to present for the first time this key moment in Judge Dredd history as it was originally published – uncensored and with colour pages also restored to their former glory!

A deadly plague developed during the brutal ‘Great Germ War’ has reached the futuristic metropolis of Mega-City Two, located on the West Coast of the USA. Charged with delivering a life-saving vaccine to the citizens of the disease-ridden city, Judge Dredd and a small crew of Judges, war droids and the lawbreaking biker, Spikes Harvey Rotten, must leave the relative safety of Mega-City One and travel a thousand miles across the radioactive wasteland known as ‘The Cursed Earth.’
PostTweetShare Share with WhatsApp Share with Messenger
Community Updates
2000AD Deals
New Comment Subscribe Save for later
5 Comments
15th Apr
Also available - Digital Edition £4.99

Sorry - looked OK when I submitted it but now has strange line breaks in the description...
15th Apr
Out of stock
16th Apr
Not out of stock. This is a great deal. Why so cold?
17th Apr
Print edition now out of stock so have expired the deal.
19th Apr
Back in Showing as in stock (added to basket OK) so unexpired.