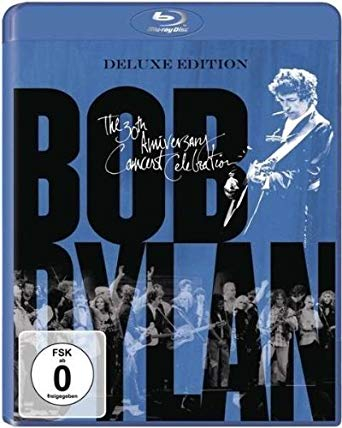 Now available for the very first time in stunning High-Definition 16:9 with remastered audio, this essential Blu-ray also features 40 minutes of previously unreleased bonus material including rehearsal footage, a look behind the scenes and interviews.

October 1992, Madison Square Garden, New York and a star-studded line up joins Bob Dylan onstage for a show to celebrate 30 years since his first Columbia Recordings album. It lasted for a mammoth four hours and featured guests including George Harrison, Eric Clapton, Neil Young, Tom Petty and Johnny Cash and many more, all backed by the house band of Booker T and the MGs.
PostTweetShare Share with WhatsApp Share with Messenger
Community Updates
Amazon DealsAmazon discount code
New Comment Subscribe Save for later
4 Comments
30th Jan
I know it’s in the picture but you might want to mention Bob in the title
30th Jan

30th Jan
one of the best singer /songwriters period,love the bloke he`s amazing so glad to be alive in the same time ive grown up listening to dylan in fact he`s all i listen to now and neil young another fine musician,and although i quite like richie rich bob as probably forgot more songs than he will ever learn,and he is still touring wonder what richie will be doing at is age.