Another great deal from Amazon's deal of the day.

Speed. Style. SportGet more out of your memory. Ballistix Sport LT DDR4 memory gives your processor the resources it needs to perform. 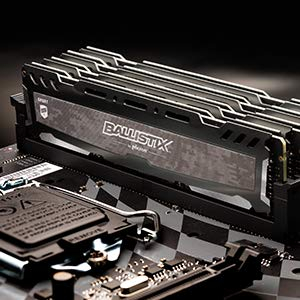 Make Your System Go BallistixGet faster speeds and run demanding games and apps with ease. Multitask at will with increased bandwidth. And strike first with better latencies and reduced load times. 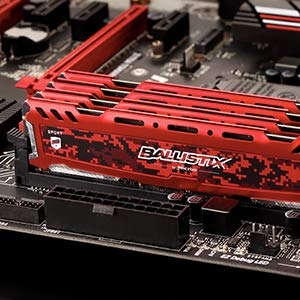 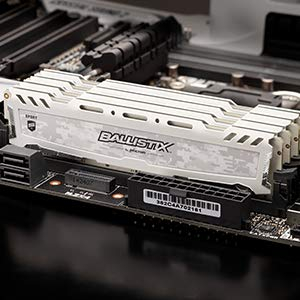 Instal with EaseDesigned for performance enthusiasts, gamers, and anyone who simply wants to get more out of their system, Ballistix makes instalation a cinch. Just plug-and-play, and get ready to win with XMP 2.0 profiles and little to no BIOS configuration.

Micron Quality: Pro Gamer ReliabilityBacked by competitive warranties, a hardcore community of fans, and a dedicated gamer support team, Ballistix memory is ready to take your in-game performance to the next level.


Edit: realised I got the 2400MHz not the 3200MHz
Edited by: "ishybon" 5th Feb
5th Feb
Thanks for posting this. As I missed the other deals on the 32 GB memory kits in the past couple of days.

16 GB is still the sweet spot for gaming. But I plan on keeping my system for another 4 years. And pricing is low at the moment and will most likely start to go back up at some point.
5th Feb
Buy now, ram's prices will go up. Hot
5th Feb

not disputing that - a few on here have said that - just wonder where do you get the stats to make such a prediction ?
5th Feb

Just a feeling, I've been checking RAM's prices closely for the past year. But of course, I might be wrong
5th Feb
Will this work with an Asus TUF x570?
5th Feb

Will this work with an Asus TUF x570?

Yes it will.
5th Feb

Will this work with an Asus TUF x570?

Yes, also look at my other RAM posting specifically designed for TUF boards hotukdeals.com/dea…d=7 you could buy 32gb of that for £108
5th Feb

Thanks I was hoping to get this deal instead of the linked (saw that too) so I'm only using 2 slots so I can completely unnecessarily upgrade to 64gb in the future!
Edited by: "juxtapozed" 5th Feb
5th Feb

Make sure you check the manual so you enable dual channel. It's usually 1-3 or 2-4 slots.
5th Feb

Yes, if your wanting to upgrade in the future this is the one
5th Feb

Yes, if your wanting to upgrade in the future this is the one

It's just from past experience. I've seen storage pricing and memory pricing going up and down over the years for many reasons.

So if you are interested in either. Now is the time to buy.
Edited by: "Rojo66" 5th Feb
5th Feb

Next generation consoles, PS5 and Xbox something, by end of year, so RAM probably will hold or rise in price.
5th Feb

PS5 and Xbox thingy by end of year will affect the price.
5th Feb

PS5 and Xbox thingy by end of year will affect the price.

PS5 news is imminent too as the website is now active:playstation.com/en-…s5/, we could see a price rise in the next couple of weeks on DDR4 RAM
5th Feb
Just bought thanks op!
5th Feb

They will use GDDR5 though wont they ? Still this is an absolute bargain anyway
5th Feb

Nobody knows yet, you would think so but if they are going to be as good as everybody is claiming I wouldnt be suprised to see a combo.
5th Feb
thanks for the heads up folks
5th Feb
Cheers for this. Couple of these plus a Ryzen bundle from the CCL/Ebay deal at the moment is going to make for a nice upgrade to my UnRAID server. Should be able to run a decent bunch of virtual machines now with this much RAM and cores
5th Feb
Is this really a good deal. I 32GB Crucial Ballistix Sport LT BLS16G4D32AESC 3200 MHz, DDR4 RAM, (16 GB x 2), CL16 ££70 Amazon only a few weeks ago
5th Feb