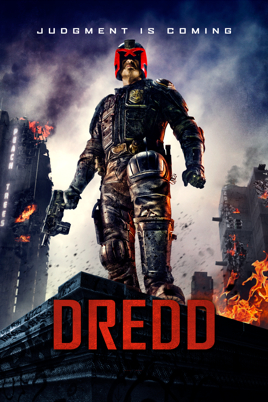 It’s worth having an account and really easy to just have both accounts logged in and switch between the two accounts.
Edited by: "ThePointyEnd" 28th Feb
28th Feb

It is the US as it says in the title. $5 per movie.
28th Feb
Stallone's Judge Dredd?! Never!! He shows his face ffs! District 9 though, excellent!
28th Feb

It’s not the Stallone one. That one was called Judge Dredd. This is the newer Dredd with Karl Urban.
Edited by: "ThePointyEnd" 28th Feb
28th Feb
where can i buy US iTunes vouchers?
28th Feb

I gathered that now, I didn't notice US originally in the title. It's much hassle to switch accounts and I'd rather my movies be under the same account. I'll pass on this one.
28th Feb

Oh, the photo looks like Stallone's one. Dont remember it looking like that. In that case I would recommend it highly. Urban's film understood the material and I will be forever annoyed at the public for not supporting it at the cinema.

There was going to be a trilogy with Judge Death making an appearance ‌
Edited by: "HyperLuminal" 28th Feb
28th Feb

Works great on Apple TV where you can easily swap (and use Movies Anywhere, too, to get cheaper films through Google Play) but you still can't keep swapping on iPhone or iPad, sadly.
28th Feb
Bloody hell 4K scorching - also Dredd in 4K is not available in the UK, so it’s a even sweeter deal.
also it was just the 43rd Anniversary of 2000ad last week and Dredds Anniversary is in March.
43 years old Comic and it still kicks ass.

That poster there is actually the only poster they used to advertise it really maybe apart from a black one with silhouette outline of Dredd in the Dark that was in one cinema I went to inside but this one has definitely been the dvd/bluray cover since release.

all other posters & covers have been out on collectors editions afterwards mostly.


I know sucks about the Sequels but at least we are getting the TV series eventually though it was announced 2 years ago for release in 2019 but it hasn’t even started filming , I hope they aren’t waiting until 2022 release for the 10th Anniversary of this film as an excuse to recast Urban, I will be super p**sed off. Maybe though he will be in it Thor Ragnorok Delayed him for it for 2019 and then the boys (which is also an excellent comic show)
28th Feb

Amazon.com you can use your UK account. Also use a fee free card and pay in dollars. Code sent by email instantly.
28th Feb

SO if I get it, can I use it on my UK account? D I need to use VPN on my UK iTunes account? not quite clear what the process is...
28th Feb

This explains how to create a US iTunes account.

The Boys is magnificent. I've watched the series a handful of times now and I'm finally ok with his accent He must've had a lot of direction from Simon Pegg because he's definitely got the right amount of usage of the the four-letter 'c' word in most sentences. Brings a real authenticity to his London-based bad boy persona
28th Feb
Problem is iTunes you can't play everywhere like Google's
28th Feb
The Matrix isn't part of the deals today unfortunately. Just its sequels.
28th Feb

The Matrix isn't part of the deals today unfortunately. Just its sequels.

Thanks i was convinced I saw The Matrix will correct
Edited by: "ThePointyEnd" 28th Feb
28th Feb

Problem is iTunes you can't play everywhere like Google's

I used to think the same, however, I'm not sure that's still the case. The Apple TV app is available on my Roku stick and I hear it's also available on the Amazon Fire Stick, too.
28th Feb

It is plus newer Samsung and LG TV’s
28th Feb

‌ Got neither - that prob explains !
28th Feb

Or if you have one change the country of your Amazon account to USA(or just log into Amazon.com via a browser) then search for iTunes email delivery.
28th Feb

Problem is iTunes you can't play everywhere like Google's

That’s not strictly true, as already mentioned The Apple TV app is available on other devices and some Smart TVs.
And also one of the bonuses of buying from US iTunes is providing you’ve setup a Movies Anywhere account then movies from supporting studios will also port through to your UK Google Play/YouTube account which can be played pretty much everywhere providing your YouTube app supports movie playback.

That's exactly what I have set-up. I bought Oblivion and it was available on Google play movies when I checked
EDIT: For those interested, this shows up as 4K with Movies Anywhere. A quick check on google play movies showed it as a 4K library title
Edited by: "imdurc" 29th Feb