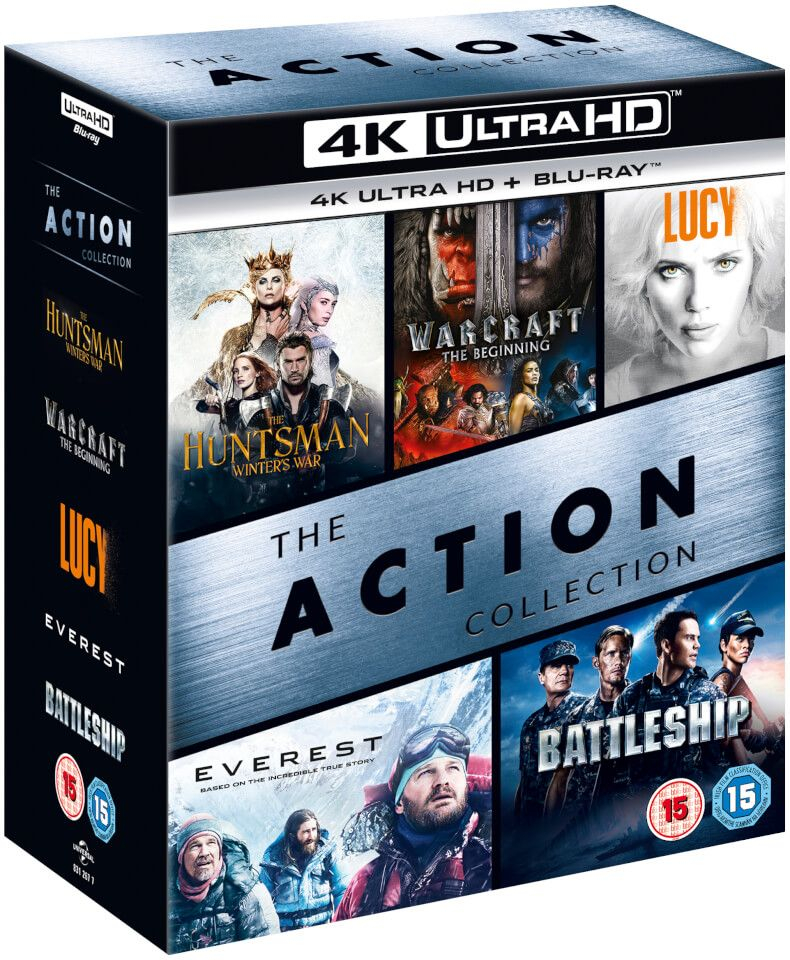 From the slopes of Earth’s most forbidding mountain to the fantasy realm of Azeroth, from the limitless mind of a superhuman to the threat of invasion and conquest, Universal Pictures proudly presents ‘The Action Collection’. This is the ultimate big-screen action-adventure package featuring five of the most explosive movies ever assembled in Ultra High Definition 4K.

Indulge your senses in heart-racing real-life courage, vast inter-dimensional conflict and epic fantasy featuring some of cinema’s biggest names and the most spell-binding movie effects and action sequences ever captured on screen.

The Huntsman, four dwarves, and his long-thought-dead wife go on a quest to keep two evil queen sisters from finding the Mirror and gaining the power to rule the world.

From Legendary Pictures and Universal Pictures comes Warcraft, an epic adventure of world-colliding conflict based on Blizzard Entertainment’s global phenomenon.

The peaceful realm of Azeroth stands on the brink of war as its civilization faces a fearsome race of invaders: orc warriors fleeing their dying home to colonize another. As a portal opens to connect the two worlds, one army faces destruction and the other faces extinction. From opposing sides, two heroes are set on a collision course that will decide the fate of their family, their people, and their home.

Scarlett Johansson and Morgan Freeman star in this sci-fi action thriller written and directed by Luc Besson. Johansson stars as the titular heroine who finds herself caught up in the dodgy dealings of the Taiwanese mob while living in Taipei. Forced into becoming a smuggler, she is drugged before a package is inserted into her stomach for safe transit. Lucy is then severely beaten for protesting her situation which results in the package bursting inside her and leaking into her bloodstream. As the drug takes over her body, Lucy becomes capable of using a higher brain capacity than humans are naturally accustomed to which makes her able to use telekinesis and absorb knowledge rapidly. Meanwhile, neurological scientist Professor Norman (Freeman) takes an interest in Lucy's evolution as she takes revenge on those responsible for her extraordinary transformation and evades those who wish to harness her powers for their own ends.

Inspired by the incredible events surrounding an attempt to reach the summit of the world’s highest mountain, Everest documents the awe-inspiring journey of two different expeditions challenged beyond their limits by one of the fiercest snowstorms ever encountered by mankind. Their mettle tested by the harshest elements found on the planet, the climbers will face nearly impossible obstacles as a lifelong obsession becomes a breathtaking struggle for survival.

Peter Berg (Hancock) produces and directs Battleship, an epic-scaled action-adventure that unfolds across the seas, in the skies and over land as our planet fights for survival against a superior force. Inspired by Hasbro's classic naval combat game, Battleship stars Taylor Kitsch as Lt. Alex Hopper, a Naval officer assigned to the USS John Paul Jones; Brooklyn Decker as Sam Shane, a physical therapist and Hopper's fiancée; Alexander Skarsgård as Hopper's older brother, Stone, Commanding Officer of the USS Sampson; Rihanna as Petty Officer Raikes, Hopper's crewmate and a weapons specialist on the USS John Paul Jones; and international superstar Liam Neeson as Hopper and Stone's superior (and Sam's father), Admiral Shane.

The discount code SPAWN10 will reduce the price to £28.98 with delivery.

or £26.99 with free delivery if you have REDCARPET
Edited by: "kobrakaan1" 10th Apr
10th Apr
A few turds in this set
10th Apr
Yikes. You could not pay me to watch Battleship again.
10th Apr
Brooklyn Decker
11th Apr
yet Battleship was one the first movies. i was happy to buy again in 4k. big tv plus good AV setup. this rocks.
11th Apr

Good set for the 4k