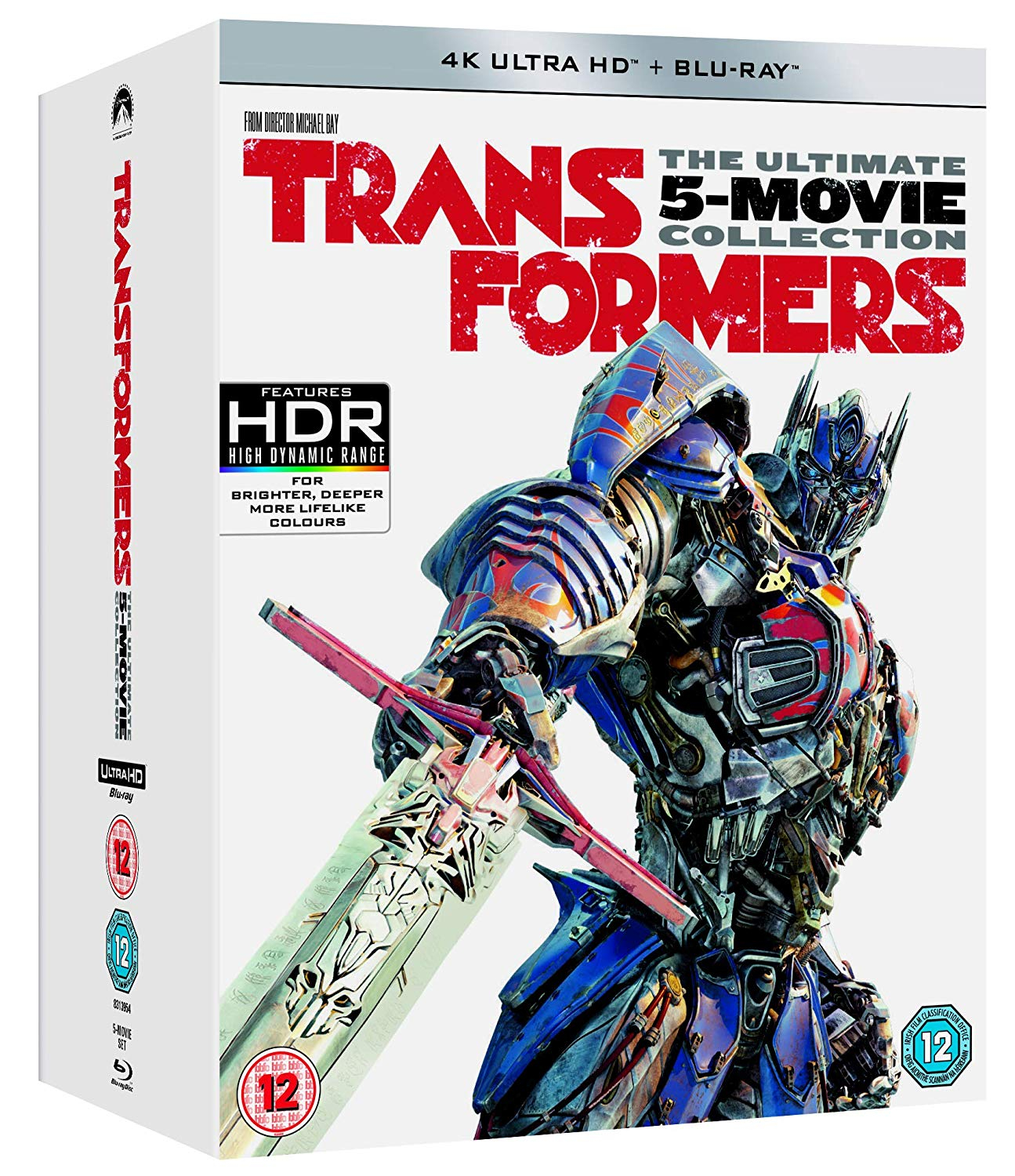 4K Collection of all five Michael Bay Transformers Movies in which the children's cartoon sci-fi series from the 1980s is brought up-to-date. In 'Transformers' (2007) a battle rages between two camps of an alien race from the planet Cybertron - the Autobots and the evil Decepticons. In an effort to prevent the Decepticons from gaining possession of the Allspark, a cube with the capacity to grant infinite power, the Autobots managed to smuggle the object to Earth, where they secretly hid it. Now, hundreds of years later, with the Decepticons searching for the cube, the Autobots enlist the help of young earthling Sam Witwicky (Shia LaBeouf) to help foil the Decepticons' plans for world domination. In 'Transformers: Revenge of the Fallen' (2009), after he glimpses the truth about the ancient origins of the Transformers through a powerful vision sent to him by the Allspark, Sam once again finds himself the target of the evil Decepticons, who have returned to Earth under the command of the formidable Starscream (voice of Charles Adler). Joining the Autobots' mission to protect humankind is Optimus Prime (Peter Cullen), who forms an alliance with international armies for this second epic battle. In 'Transformers: Dark of the Moon' (2011), when the Autobots discover that a Cybertronian spacecraft is hidden on the Moon, a race against the Decepticons ensues as both sides battle to reach it first. In 'Transformers: Age of Extinction' (2014), four years after the invasion of Chicago, mechanic and single parent Cade Yeager (Mark Wahlberg) discovers what he believes to be a dilapidated truck and takes it home to repair. However, what he really has resting in his garage is a deactivated Optimus Prime. When government officials learn of the discovery they try to push humanitarian boundaries in the name of scientific development. Finally, in 'Transformers: The Last Knight' (2017), with the battle between the human race and the Transformers raging on, mechanic Cade Yeager forms an alliance with English Lord Sir Edmund Burton (Anthony Hopkins) in an attempt to figure out why the Transformers keep returning to Earth. Meanwhile, Autobots leader Optimus Prime learns he was responsible for the death of his home world Cybertron. Desperate to make amends, he returns to Earth in search of a mysterious artefact which could bring Cybertron back to life and will seemingly do anything to achieve his goal.
PostTweetShare Share with WhatsApp Share with Messenger
Community Updates
Amazon DealsAmazon discount code
If you click through or buy, retailers may pay hotukdeals some money, but this never affects which deals get posted. Find more info in our FAQs and About Us page.
New Comment Subscribe Save for later
Top comments
23rd Dec 2019

They are romantic comedies about a time travelling young woman's coming of age in the post Victorian era with her faithful pet llama
6 Comments
23rd Dec 2019
What are the films about?
23rd Dec 2019

2 and a half hours

Has google or IMDB stopped working. ‌ ‌
23rd Dec 2019
4K Collection of all five Michael Bay Transformers Movies in which the childhood memories of a beloved cartoon sci-fi series from the 1980s are trampled upon.

Fixed it for you...
12th Jan
These movies in 4k are incredible. I vote hot.