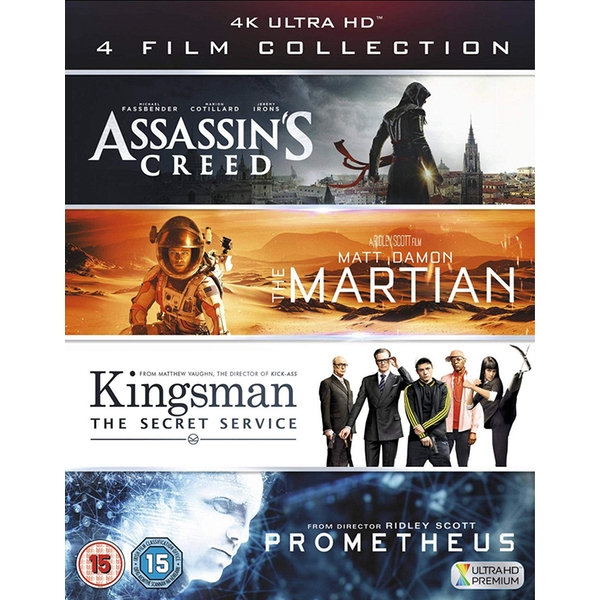 Product Description
4KUHD Film Collection (Assassin's Creed, The Martian, Kingsman & Prometheus) Blu-rayPlease note this is a region B Blu-ray and will require a region B or region free Blu-ray player in order to play.

Assassin’s Creed
Oscar nominee Michael Fassbender stars in this big-screen action-adventure, based on the wildly popular gaming phenomenon. Fassbender plays Callum Lynch, who experiences the life of his 15th century ancestor through a technology that unlocks his genetic memories. Callum discovers he once belonged to a secret society of assassins and amasses lethal skills to take on the oppressive Templars.

Kingsman
Based upon the acclaimed comic book and directed by Matthew Vaughn (Kick Ass, X-Men First Class), the film tells the story of The Kingsman; a super-secret spy organization that recruits an unrefined but promising street kid into his agency’s ultra-competitive training program just as a global threat emerges from a twisted tech genius.

Prometheus
After scientists Elizabeth Shaw (Noomi Rapace, The Girl with the Dragon Tattoo) and Charlie Holloway (Logan Marshall-Green, Devil) discover mysterious cave drawings that point to the origins of mankind, they soon find themselves aboard the spaceship Prometheus, sponsored by Weyland Industries and on a journey to uncover the secrets of humanity. Overseen by the imperious Meredith Vickers (Charlize Theron, Snow White and the Huntsman), looked after by the android David (Michael Fassbender, X-Men: First Class), and backed up by a team of scientists, Shaw and Holloway arrive on the isolated moon LV-223 to discover an abandoned alien spaceship and the truth that not all is as it seems.

The Martian
During a manned mission to Mars, Astronaut Mark Watney (Matt Damon) is presumed dead after a fierce storm and left behind by his crew. But Watney has survived and finds himself stranded and alone on the hostile planet. With only meager supplies, he must draw upon his ingenuity, wit and spirit to subsist and find a way to signal to Earth that he is alive. Millions of miles away, NASA and a team of international scientists work tirelessly to bring the Martian home, while his crewmates concurrently plot a daring, if not impossible rescue mission. As these stories of incredible bravery unfold, the world comes together to root for Watney’s safe return. Based on a best-selling novel, and helmed by master director Ridley Scott, The Martian features a star studded cast that includes Jessica Chastain, Kristen Wiig, Kate Mara, Michael Pena, Jeff Daniels, Chiwetel Ejiofor, and Donald Glover.

PostTweetShare Share with WhatsApp Share with Messenger
Community Updates
365games.co.uk Deals365games.co.uk promo code
If you click through or buy, retailers may pay hotukdeals some money, but this never affects which deals get posted. Find more info in our FAQs and About Us page.
New Comment Subscribe Save for later
11 Comments
17th Dec 2019
Can't you just behave!
17th Dec 2019
The Bourne Ultimatum 4K UHD Blu-ray for £6.29 With same Code
Limited availability
17th Dec 2019

Are these in seperate cases? Ordered anyway.

Yes, I bought the set last year. Traded in assassins creed and kingsman, sold the blu ray discs from the Martian and Prometheus. Basically got the 4k discs of those 2 for free
17th Dec 2019

Use Prometheus and Assassin Creed
One of the worst movies ever as a frisbee or coaster
Edited by: "Norseg" 18th Dec 2019
18th Dec 2019