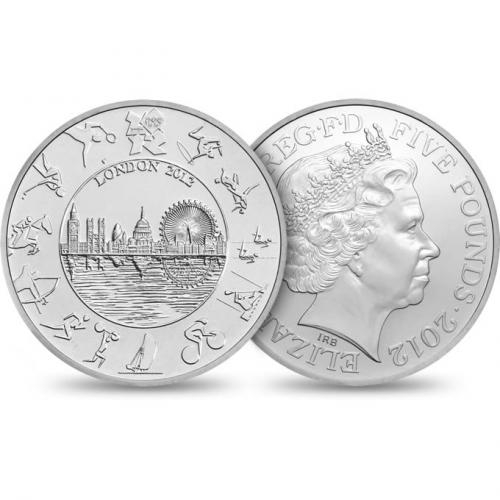 I prefer coins to notes so this is a good deal for me. spend it, save it. Do whatever you want as its money. Everyone prefers being given a nice shiny £5 coin instead of a smelly old five pound note. The coin may go up in value on eBay .If not spend it and you have lost nothing. There are 5 different coins you can get (including jubilee). click on view full basket and use use code HD2G for free postage which is taken off just before you pay.
PostTweetShare Share with WhatsApp Share with Messenger
Community Updates
The Royal Mint DealsThe Royal Mint discount code
If you click through or buy, retailers may pay hotukdeals some money, but this never affects which deals get posted. Find more info in our FAQs and About Us page.
New Comment Subscribe Save for later
369 Comments
18th Apr 2012
not really a deal is it?
18th Apr 2012
[image missing]
18th Apr 2012
Amazing! A great memento of the London 2012 Games and it will always be worth its value if not more!

Heat!
18th Apr 2012
Try sending it though
18th Apr 2012
Limited to only 4 each! I wanted a stack of them
18th Apr 2012
Buying these will have the exact opposite effect to the quantitative easing the Bank of England has been doing. Totally pointless idea on every level and bad for both your bank account as well as the wider economy.
18th Apr 2012
I can't bring myself to vote a fiver for a fiver hot.
18th Apr 2012
Not a deal and it's olympics related and so a double negative from me - one for style and the other for technical merit!

Like everything else that I've seen that's olympics related, it's ugly, Even the Queen has turned her back on this item and looks decidely unhappy that she's had to put in an appearance.
18th Apr 2012

Calm down, they would have to sell millions of these for it to have the slightest effect on the economy, when bought they will rarely be used anyway. Relax.
18th Apr 2012
there are 2 of them for fiver
18th Apr 2012

Erm No.
In exchange for 43p worth of metal, you give £5 in 2012 spending power to the government to spend how they feel fit, and in return you get a promise that you will be paid £5 minus inflation at some point in the future, assuming you even redeem at all, which most collectors won't, especially foreign ones who won't be able to cash these in once they return home. In any eventuality, messers Cameron & Osborne get money to play with, money which will be used to pay someone or buy something in the economy. At least under this option, collectors are happy with getting a shiny coin whilst the Gvmt get money to spend; it just won't be spent in the local economy of the collector, which is what I think you're getting at.

Under QE, the BOE logs into its computer and creates money that wasn't there before. That is then used to buy assets for which demand has faltered, assets owned by people who don't like to lose money. Much like the worthless pieces of metal bought for £5, the BOE increases their value by creating demand. Now that the QE money is 'out there is the economy', the money is used like all money in the economy and is taxed likewise. This tax is then used by the Goverment to spend as it sees fit. In any eventuality, messers Cameron & Osborne get money to play with, money which will be used to pay someone or buy something in the economy, with the added effect that asset-rich people or organisations, who should have been bankrupted, will be saved or 'bailed-out' by QE. The loss that the asset holders should have accepted has thus been successfuly transferred to those without liquidity or the knowledge to understand what has just happened. Those people, i.e the public (suckers), will thus pay more for goods, oil and food in the future, due to this additional QE money chasing the same limited amount of goods, oil, and food. The final element is to keep the game going as long as possible by telling the public not to worry as it's being done it their best interests and when prices rise they were were 'unexpected' or 'a shock', or were due to 'one of factors' or 'the price of oil'. So, as you can see, under this scenario, although a financial reset (rich people bankrupted, cash machines stop working, violent looters rampaging though our cities) has been been avoided (oh, wait a minute...) we don't get a commemorative coin in exchange, merely higher prices and a confiscated pension.
18th Apr 2012

Erm No to you.

As this is legal tender its monetary value is transferred to it from the Bank of England/national mint. They have to follow the same procedure as printing new bank notes or any other legal tender. You are basically transferring your money into another format which then pretty much takes it out of circulation (not on every occasion, but the vast majority will spend the next 50+ years sat in a draw doing nothing). Not to mention the extra cost of manufacturing, marketing and distributing which is all a drain on the nation.

Totally useless. The only reason to possibly buy one would be if you get a huge buzz from collecting this sort of thing. I feel sorry for people who do.
Edited by: "CHEEPSTUFFRULES!" 18th Apr 2012
18th Apr 2012

You've not thought this through.

Are you telling me that the creator of this coin who now has £4.50 more than they started with somehow... doesn't? Because you said so? Please elaborate, I can always do with a good laugh.
18th Apr 2012

I am calm (really I am). I am just trying to put up a logical reason for people to avoid this 'product' and go and buy something that may actually have a use in the real world. This is the last thing people should be spending money on in a recession.
18th Apr 2012

Really, go and look up the procedure for manufacturing legal tender. They don't just print up notes and hand them out to the banks for free do they.

Any legal tender has a level of credit or worth assigned to it by the Bank of England when it is produced equal to its face value. Each of these coin will have £5 of value assigned to it at its point of production. This is GCSE level economics.
18th Apr 2012
why are some people so against this? it is no different from taking a £5 note out of a cash machine in your local high street

It would be if you then put that £5 note in a draw for 10-50 years and never used it to buy anything with ever again.
18th Apr 2012
Can you get cashback?
18th Apr 2012
Be weary of this company, not sure if its just post but my mum bought a similar Olympic coin aswell and after a few months she was also sent another one by random, called them up and apparently my mum has been subscribed to the £5 coin collection? Weird
18th Apr 2012
I'm an economics student and you're both boring me to death. If you think you look clever on here you don't, you spoil this website and are totally off topic.

Btw, QE is stupid, but I'll keep that argument on the relevant website!
18th Apr 2012

It is a relevant argument to have as someone posted the deal. Just healthy debate, which is always a good thing in my mind.

It you want a parallel example of how the public can swap their cash for a promise to pay in the future, try this link:
War Bonds

Good luck with your studies. If you can stick to the actual facts governed by the maths, physics and sociology of economics, you may find that your interest in the subject becomes rewarding.
18th Apr 2012

go and spend it then.. you don't have to leave it in a draw for 10 years

A few years ago I bought a Concorde £5 collectors edition coin for £5 ... and today it's worth around £25 on eBay!

These get pretty rare, in a few years time when someone wants an Olympic collectable (there's always someone on eBay) then you can make some money or keep it yourself it'll just increase in value!
18th Apr 2012
Obviously people buy them.....not the same design but an example!

I did not say I was currently studying GCSE economics, in fact this is probably sub GCSE.

Good bit of googling there, keep going a bit linger and you may understand what I was talking about.
18th Apr 2012

go and spend it then.. you don't have to leave it in a draw for 10 years

That would be great, but nobody does spend these things. They are just a way of removing money from the system which is (on a much smaller scale) inverse QE.
18th Apr 2012

That design is also available for a fiver
18th Apr 2012

But the LONDON Olympics will lift magically everyone's spirits, just like the royal wedding!

We the peasants will once again forget that we diligently slave away and sacrifice the larger part of the only life we will ever have, we sacrifice time away from our families, we sacrifice our dreams and passions in order to fund royal parasites, banking parasites, political parasites and any other rich over privileged leeches that want to suck us dry... THIS IS OUR OPIUM, MAN!!!
18th Apr 2012

Oh. You mean like the Queen's Silver Jubilee Coin that everyone has?
18th Apr 2012

Everything about the Olympics seems to rapidly turn to fail......

I must say I don't agree with you on QE, tho this is not the website to be discussing it. We are discussing the deal, not how fast the royal mint is churning out money.

So can i give you the amount it costs to create a £50 note.