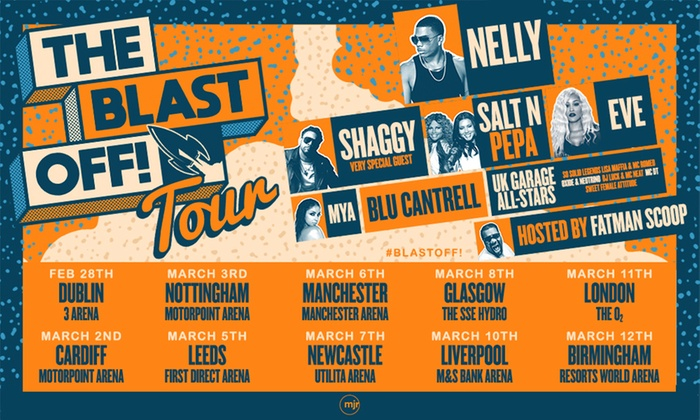 Nelly, Salt-N-Pepa, Shaggy, Eve and Mya tour the country with UK garage artists such as Sweet Female Attitude, all hosted by Fatman Scoop

The Blast Off! Tour with Nelly, Shaggy, Salt N Pepa + moreIn March, a line-up of American and British artists sets off to tour the UK. The Blast Off! will be headlined by Nelly, Salt-N-Pepa, Shaggy, Eve, Mya and Blu Cantrell, with UK garage stars such as Sweet Female Attitude, Oxide & Neutrino and DJ Luck & MC Neat also on the bill. Hosted by American hip-hop personality Fatman Scoop, the events will see party animals take the dance floor by storm.


The Fine Print
How to Use:
1. At checkout you will be prompted to enter a delivery address. Delivery address cannot be amended after order is placed.
2. Tickets will be sent out up to two days before the event.
3. Present official event ticket(s) on event day. Entry will not be permitted with a Groupon voucher alone.
Purchase: May buy 9 additional as gifts. All tickets bought under the same category and using the same delivery address will be seated together.
Restrictions: 14-day cancellation rights do not apply; no refunds or exchanges permitted. For step-free access, please contact the venue directly before purchase. Under 14s must be accompanied by an adult in Cardiff, Nottingham and Manchester. Must be 14 or older and under 16s must be accompanied by an adult in Birmingham. Must be 14 or older in Leeds, Newcastle, Glasgow and Liverpool. Must be 16 or older in London. For Groupon FAQ's click here.
Validity: Valid on date specified on Groupon only. Valid on option purchased only.
PostTweetShare Share with WhatsApp Share with Messenger
Community Updates
Groupon DealsGroupon discount code
New Comment Subscribe Save for later
4 Comments
8th Feb
Looking at that poster, why not call it the cream crackered tour?
8th Feb
A promoter must have have thought this was a good idea for a tour. Can't think why myself.
8th Feb

Its an amazing idea of a tour. 00s hip hop/r'n'b stars. Problem is the promoter hasn't really promoted it
8th Feb
Finally, somewhere I can show off my new Adidas, Holister and Superdry stuff I've bought on hukd...