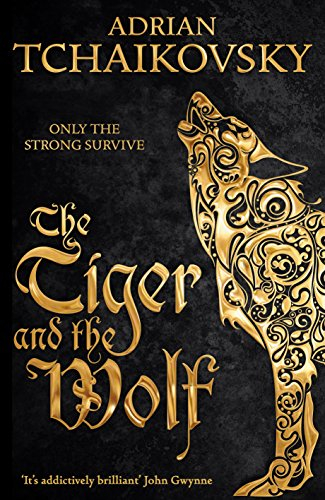 A couple of Adrian Tchaikovsky Fantasy/SF books e.g. The Tiger and the Wolf (Echoes of the Fall Book 1) 99p Kindle Edition

"The Tiger and the Wolf" Excellent read, thoroughly enjoyed this one.

The first in the Echoes of the Fall series, The Tiger and the Wolf is a high fantasy novel by Adrian Tchaikovsky, winner of the British Fantasy Award for Best Novel. Adrian Tchaikovsky is also the author of the Arthur C. Clarke award-winning Children of Time.

In the bleak northern crown of the world, war is coming . . .

Maniye's father is the Wolf clan's chieftain, but she's an outcast. Her mother was queen of the Tiger and these tribes have been enemies for generations. Maniye also hides a deadly secret. All can shift into their clan's animal form, but Maniye can take on tiger and wolf shapes. She refuses to disown half her soul so escapes, rescuing a prisoner of the Wolf clan in the process. The killer Broken Axe is set on their trail, to drag them back for retribution.

The Wolf chieftan plots to rule the north and controlling his daughter is crucial to his schemes. However, other tribes also prepare for strife. Strangers from the far south appear too, seeking allies in their own conflict. It's a season for omens as priests foresee danger and a darkness falling across the land. Some say a great war is coming, overshadowing even Wolf ambitions. A time of testing and broken laws is near, but what spark will set the world ablaze?

"Cage of Souls" What a world! I would like a few more books set in this world, it's a bit of a crazy ride.

Humanity clings to life on a dying Earth in an epic, far-future SF from an award-winning author.

The sun is bloated, diseased, dying perhaps. Beneath its baneful light, Shadrapar, last of all cities, harbours fewer than 100,000 human souls. Built on the ruins of countless civilisations, Shadrapar is a museum, a midden, an asylum, a prison on a world that is ever more alien to humanity.

Bearing witness to the desperate struggle for existence between life old and new is Stefan Advani: rebel, outlaw, prisoner, survivor. This is his testament, an account of the journey that took him into the blazing desolation of the western deserts; that transported him east down the river and imprisoned him in the verdant hell of the jungle's darkest heart; that led him deep into the labyrinths and caverns of the underworld. He will meet with monsters, madman, mutants.

The question is, which one of them will inherit this Earth?
PostTweetShare Share with WhatsApp Share with Messenger
Community Updates
Amazon DealsAmazon discount code
New Comment Subscribe Save for later
3 Comments
7th May
I read Cage of Souls a week or so ago, I enjoyed it, very well written
7th May
I've been wanting to try this author for a while now. Bought Cage of Souls for 89p. Bargain! Thanks OP!
8th May
Really enjoyed Children of Time. Heat!