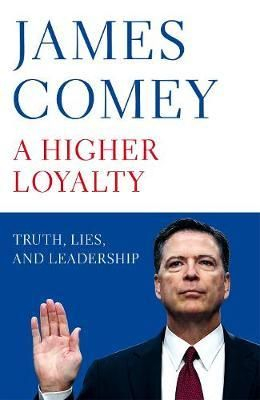 Not for everyone but It's a fascinating read and can't go wrong for £3 delivered.

In his forthcoming book, former FBI director James Comey shares his never-before-told experiences from some of the highest-stakes situations of his career in the past two decades of American government, exploring what good, ethical leadership looks like, and how it drives sound decisions. His journey provides an unprecedented entry into the corridors of power, and a remarkable lesson in what makes an effective leader. Mr. Comey served as director of the FBI from 2013 to 2017, appointed to the post by President Barack Obama. He previously served as U.S. attorney for the Southern District of New York, and the U.S. deputy attorney general in the administration of President George W. Bush. From prosecuting the Mafia and Martha Stewart to helping change the Bush administration's policies on torture and electronic surveillance, overseeing the Hillary Clinton e-mail investigation as well as ties between the Trump campaign and Russia, Comey has been involved in some of the most consequential cases and policies of recent history.
PostTweetShare Share with WhatsApp Share with Messenger
Community Updates
A Great Read DealsA Great Read voucher codes
New Comment Subscribe Save for later
11 Comments
21st Jan
Looking forward to download it for free from some dodgy site.
21st Jan

Looking forward to download it for free from some dodgy site.

I'm not saying it's my kinda book. But it's 3-quid for a physical copy delivered and has a high review profile in the 1000's...! Some people! Anyway, what site are you talking about...?
Edited by: "ronin13" 21st Jan
21st Jan
Super Trump and how he saved America, single handed whilst those nasty socialist, green meddlers tried to tharwt his heroic efforts.
21st Jan
If you want to read a book from a "soon to be imprisoned" leading member of the coup of the White House - fill your boots. You'll be told "A" story NOT THE STORY.
Regardless of your politics - this is an example of the horrendous Deep State & Swamp that has been, and continues, to dog the USA.
A £3 book of bog roll

Russian Troll?
21st Jan
Disgusting, lying scum. 8 years ago, I always look up to James Comey. I see him as an honest to God person.
It's been shown that he's a lying, snivelling self serving clown.
The sad thing is that, so many innocent people are in jail or facing financial ruins for lying to Congress. How this fool is not in jail just shows how the political class protect themselves.
I hope and pray that when John Durham finish his criminal investigation into the intelligent apparatus including the FBI effort to twart a democratic effort, that Mr Comey will be prosecuted and end up in jail.

Just got to laugh at this
22nd Jan

Just got to laugh at this

Just got to laugh at this

Full if proven lies though. Cold from me.

So's POTUS be he seems to get by OK