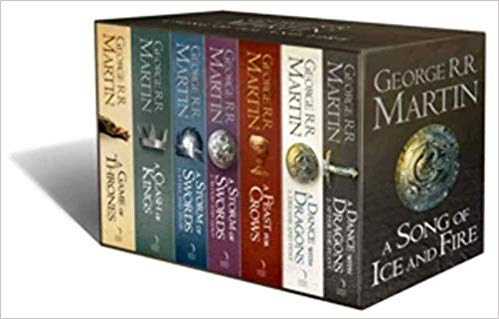 For anyone who wants more than HBO, here's the complete box set (5 books, 7 volumes) at the absolute lowest (going price is £30). Amazon deal of the day.
Puns about the remaining two books are most welcome. 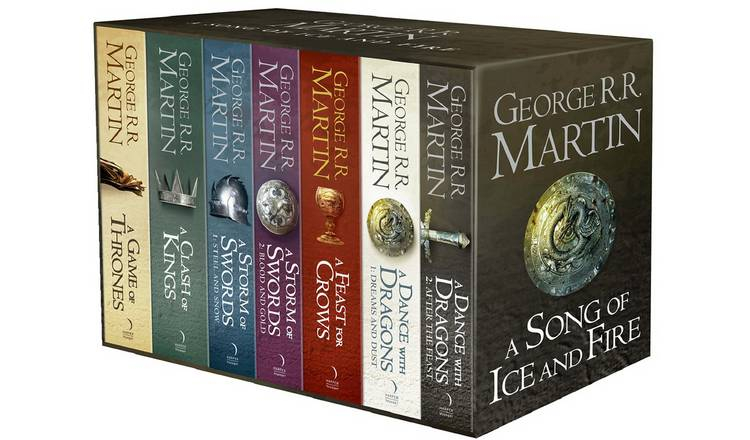 George R.R. Martin’s A Song of Ice and Fire is the greatest fantasy epic of the modern age, and is now available in a collectible box set, including an exclusive fold-out map of Westeros. Now a major Sky Atlantic TV series from HBO, featuring a stellar cast.

George R.R. Martin's A Song of Ice and Fire series has set the benchmark for contemporary epic fantasy. Labelled by Time magazine as one of the top 100 most influential people in the world, Martin has conjured a world as complex and vibrant as that of J.R.R. Tolkien’s, populated by a huge cast of fascinating, complex characters, and boasting a history that stretches back twelve thousand years.

Three great storylines weave through the books, charting the civil war for control of the Seven Kingdoms; the defence of the towering Wall of ice in the uttermost north against the unearthly threat of the Others; and across the Narrow Sea the rise to power of Daenerys Targaryen and the last live dragons in the world.

The dimension of the box set is 197mm x 130mm.
PostTweetShare Share with WhatsApp Share with Messenger
Community Updates
Cyber Monday 2020 DealsAmazon DealsAmazon discount code
If you click through or buy, retailers may pay hotukdeals some money, but this never affects which deals get posted. Find more info in our FAQs and About Us page.
New Comment Subscribe Save for later
9 Comments
2nd Dec 2019
"Complete" apart from the other books he can't be bothered to finish.
2nd Dec 2019
Thanks, always fancied reading these. Bought.
2nd Dec 2019
Great books started reading them years before the TV series best fantasy series I've read and I've read loads just worried he will never finish the story! So good deal heat added
2nd Dec 2019

... just worried he will never finish the story!

He won't. I started reading these before my daughter was born. She's now at university. We've had a decade of promises. All broken.
2nd Dec 2019
Not sure if i wanna get this or wait till june, he said he will get this resolved by then
2nd Dec 2019
He has given out load's of release/finish dates and they have all came and went. I sometimes wonder if they are finished and he just holds on to them or maybe he just can't finish it.
2nd Dec 2019

Me too daughter was a young teenager she's now 33 and a mum of two
2nd Dec 2019
Well, a "stellar cast," I dunno. Many were essentially unknown before the series and would have remained so, their acting is not great. But the books are worth a read, so heated.
2nd Dec 2019
I was hoping Trump would put him in Gitmo until he completed the final two books.