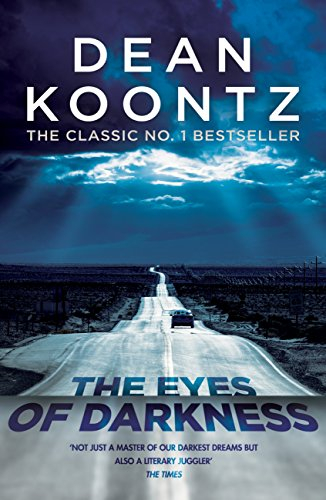 How is it that some books appear to prophesy events?
The Eyes of Darkness, a 1981 thriller by bestselling suspense author Dean Koontz, tells of a Chinese military lab that creates a virus as part of its biological weapons programme. The lab is located in Wuhan, which lends the virus its name, Wuhan-400. A chilling literary coincidence or a case of writer as unwitting prophet?


In The Eyes of Darkness, a grieving mother, Christina Evans, sets out to discover whether her son Danny died on a camping trip or if – as suspicious messages suggest – he is still alive. She eventually tracks him down to a military facility where he is being held after being accidentally contaminated with man-made microorganisms created at the research centre in Wuhan.


If that made the hair on the back of your neck stand up, read this passage from the book: “It was around that time that a Chinese scientist named Li Chen moved to the United States while carrying a floppy disk of data from China’s most important and dangerous new biological weapon of the past decade. They call it Wuhan-400 because it was developed in their RDNA laboratory just outside the city of Wuhan.”


In another strange coincidence, the Wuhan Institute of Virology, which houses China’s only level four biosafety laboratory, the highest-level classification of labs that study the deadliest viruses, is just 32km from the epicentre of the current coronavirus outbreak
. The opening of the maximum-security lab was covered in a 2017 story in the journal Nature, which warned of safety risks in a culture where hierarchy trumps an open culture.
PostTweetShare Share with WhatsApp Share with Messenger
Community Updates
Amazon DealsAmazon discount code
New Comment Subscribe Save for later
13 Comments
16th Feb
Coincidence?
Edited by: "zcaprd7" 16th Feb
16th Feb
Ordered. Sounds interesting. Thanks
16th Feb
It's just Americans, looks like some doctor/lab guy had to read it in the past and that gave him an idea where to start epidemic of his new virus pet
16th Feb
Heat was going to look for this book after reading about this coincidence on another website , apparently he originaly wrote this book under another name like writers sometimes do (nick something or other cant remember ) then re launched it in 81 under koontz. Ive read a few of his books and found the ones ive read have turned into the cant put it down type of thing. Am well pleased you found it for me cheers
16th Feb
the book was first released under the pseudonym Leigh Nichols. Well remembered Pastizzi
16th Feb
I thought I had read all Dean Koontz but not this! Thanks op
16th Feb
"How is it that some books appear to prophesy events?"


C'mon this was written almost 40 years ago.

I watched a few years back an excellent BBC series from the mid 70's called Survivors (it was slightly before my time). That is about a virus from a lab in China that escapes and spreads. It is a common theme in books and film.
Edited by: "xenophon" 16th Feb
16th Feb

I think it's the fact it's specifically in Wuhan that makes people think it's not just a common theme.
16th Feb

Started to watch the remake, didn't take to it and never continued. Give me the original anytime. Same as the Day of the Triffids, much preferred the original TV series than the later remake.
17th Feb
It's all part of their plan!!
29th Feb
1.99 now