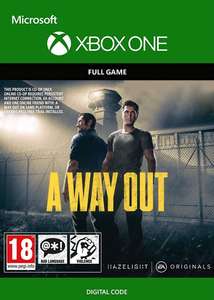 Cracking low price for the game, use the seller BestDeals and apply the code HOTUKDEALS or AKS at checkout and pay with PayPal for the price mentioned.

Cheaper by a quid compared to the previous deal from @Mark‌ 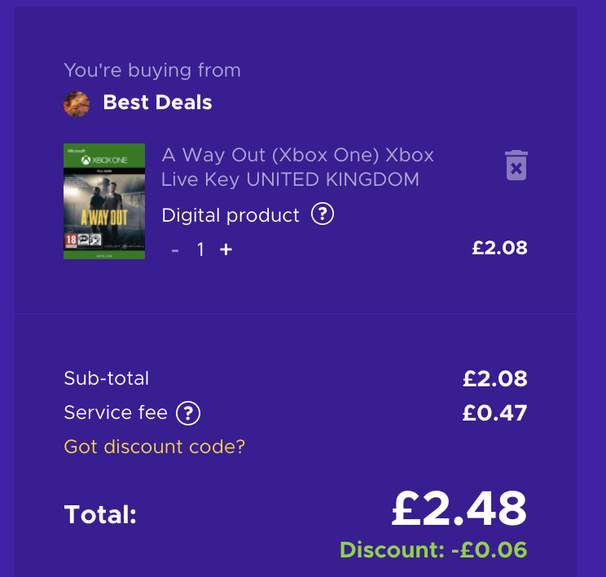 Description
A Way Out (Xbox One) key
Had a great time playing Brothers - A Tale of Two Sons? Then get ready to blast your way out of prison in this exclusively co-op action-adventure game made by the same creators, MicroPHAZE, and published by EA - A Way Out Xbox one key! The first few minutes introduce us to a simple prison break scheme but don’t be fooled. This straightforward plan quickly turns into something intricate and unpredictable. Lots of twists & turns await, so make sure to grab a friend and experience the story together through local or online play.

Fun Co-op Exclusive
A Way Out Xbox one key is meant to be played together with someone you trust. There are two main characters, Leo and Vincent, and each player controls one of them. Leo is a hardened criminal that’s been inside the prison for six months now. His crimes? Grand theft, assault, and armed robbery. While he isn’t one to make friends, he can’t escape the prison alone. This is where Vincent comes in. He’s just been convicted for fraud & murder and is willing to do anything to escape. Thus, a rocky alliance is born. Will you learn to trust one another?

Experience the Variety of Gameplay
Right from the start, Leo and Vincent aren’t the best of friends - you’ll have to work past your personal issues if you want to escape. With A Way Out Xbox one key players are going to do various tasks, such as solve puzzles, engage in prison fights, persuade or distract the guards and other characters, sneak around, run for your life, and much more! Need a distraction from the intense storyline?

Calm your nerves with these fun minigames: