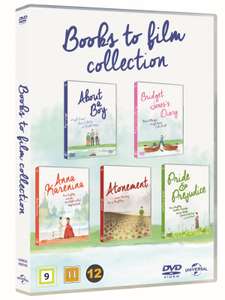 About a Boy
Based on Nick Hornby's bestselling book, Will (Hugh Grant), a rich Londoner in his thirties who, in search of single women, invents an imaginary son to attend single parent meetings. As a result of one of his liaisons, he befriends Marcus (Nicholas Hoult), an odd 12-year-old boy with problems.

Atonement
Based on Ian McEwan famous novel with Keira Knightley (Love Actually), James McAvoy (The Last King of Scotland) & Saoirse Ronan (The Grand Budapest Hotel). A fledgling 13 year old writer changes the course of several lives when she accuses her older sister's lover of a crime he did not commit.

Pride & Prejudice
Based on Jane Austen's timeless novel. Elizabeth Bennet (Keira Knightley) meets single and proud Mr. Darcy. But Mr. Darcy reluctantly finds himself falling in love with a woman beneath his class. Can each overcome their own pride and prejudice?
PostTweetShare Share with WhatsApp Share with Messenger
Community Updates
1 Comment
Post a comment