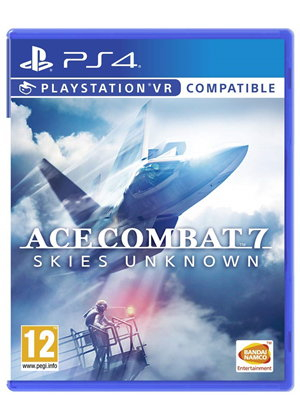 Putting gamers in the cockpit of the most advanced war planes ever developed, ACE COMBAT 7: Skies Unknown delivers a fierce air combat experience through photorealistic visuals, intense dog-fighting action, a multitude of authentic and futuristic aircraft to fly and an immersive storyline!

It's been this price for a few weeks.

It was this price a few weeks ago.

26th Mar
Ordered on 18th from base, still not arrived
26th Mar

It was this price a few weeks ago.[Image]

I am not sure if I am understanding you well enough. The picture I put is from Google search that has not been updated with the new price yet. Click to see.

I didn't realise the price had gone back up and then reduced again. My bad.
26th Mar
This is a great game. Have some heat.
26th Mar

This is a great game. Have some heat.

@mixmixi Base are really looking to clear me out.

You must resist.
26th Mar

I know, right... 2 great games vying for my wallet.

You must buy neither. Must resist.
29th Mar

So I have heard. I personally would love to give it a go, but XBOX doesn't support VR. :/