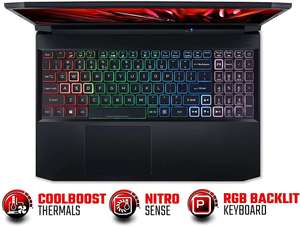 Other Nitro Deals atm with their configs are as follow:

What this Costco basket price reduction has now knocked of the bottom one in respect of the 15.6 5800H model, Costco features a 1TB SSD over the 512GB version post previous.

One time Laptop only post - now get me outtaa here.


Acer Nitro 5
Explore and enjoy a new level of gaming with the Nitro 5, featuring a powerful Intel CPU and NVidia GPU combination to provide you with excellent performance.

Dominating Specs
Equipped with a brand-new 4th gen AMD Ryzen 7 CPU, 16GB of DDR4 RAM and a 1TB SSD the Nitro 5 packs plenty of power to give you the edge during competitive gaming.

The Ultimate Play
With an NVidia GeForce RTX 3060 at its heart, the Nitro 5 gives you the power you need to rip through the most demanding games. The all-new Ampere architecture features enhanced ray-tracing cores and high-speed G6 memory to provide the most photo-realistic gaming experience ever.

Cooling Perfected
The Nitro 5 is equipped with a dual-fan, quad-exhaust design to maximise airflow and keep temperatures low. It also features Acer’s CoolBoost technology which can automatically boost fan speeds by a further 10% when needed.

NitroSense
The NitroSense control centre gives you real-time monitoring and control over a variety of important aspects of your system – temperatures, fan speeds, keyboard backlighting and more.

Breaking the Sound Barrier
Invigorate your gaming experience DTS:X Ultra audio, which works with your existing speakers or headphones to create a multi-dimensional sound that moves around you like it would in real life. Plus get deeper, richer sounds with Acer TrueHarmony - engineered to give your gaming a more immersive experience.

Latest Connectivity
The Nitro 5 ensures that you never have to worry about lagging or drop-outs when gaming - thanks to the combination of the latest Wi-Fi 6 support, offering speeds up to 3 times faster than previous generations; plus Killer Ethernet for gigabit speeds and reduced latency.

Delivery and returns at Costco

Delivery is FREE and included in the item cost for deliveries in the United Kingdom unless otherwise indicated for a specific product.

Products purchased at a Costco location need to be returned at the returns counter at any Costco warehouse.
Items ordered online can be returned at any Costco warehouse -or- you can initiate a return through Costco.com.
PostTweetShare Share with WhatsApp Share with Messenger
Community Updates
Black Friday 2021 Deals
Top comments
24 Comments
Post a comment