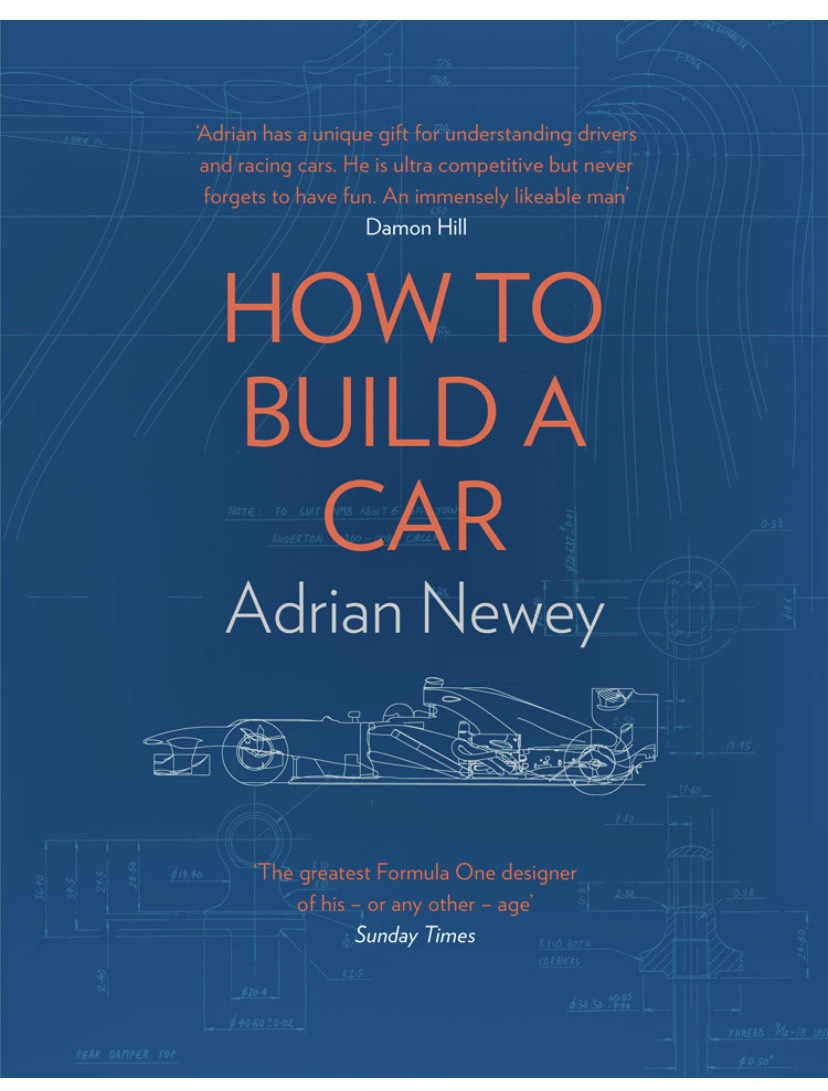 Adrian Newey - How to Build a Car: The Autobiography of the World’s Greatest Formula 1 Designer. Kindle Edition - Now 99p @ Amazon

'Adrian has a unique gift for understanding drivers and racing cars. He is ultra competitive but never forgets to have fun. An immensely likeable man.' Damon Hill

The world’s foremost designer in Formula One, Adrian Newey OBE is arguably one of Britain’s greatest engineers and this is his fascinating, powerful memoir.

How to Build a Car explores the story of Adrian’s unrivalled 35-year career in Formula One through the prism of the cars he has designed, the drivers he has worked alongside and the races in which he’s been involved.

A true engineering genius, even in adolescence Adrian’s thoughts naturally emerged in shape and form – he began sketching his own car designs at the age of 12 and took a welding course in his school summer holidays. From his early career in IndyCar racing and on to his unparalleled success in Formula One, we learn in comprehensive, engaging and highly entertaining detail how a car actually works. Adrian has designed for the likes of Mario Andretti, Nigel Mansell, Alain Prost, Damon Hill, David Coulthard, Mika Hakkinen, Mark Webber and Sebastian Vettel, always with a shark-like purity of purpose: to make the car go faster. And while his career has been marked by unbelievable triumphs, there have also been deep tragedies; most notably Ayrton Senna’s death during his time at Williams in 1994.

Beautifully illustrated with never-before-seen drawings, How to Build a Car encapsulates, through Adrian’s remarkable life story, precisely what makes Formula One so thrilling – its potential for the total synchronicity of man and machine, the perfect combination of style, efficiency and speed.

‘Quite superb…This book pulls off the remarkable feat of being a first-class autobiography and textbook all in one. For those studying the evolution of the F1 car between the late ‘80s and now, it decodes all the mysteries previously hidden by competitive secrecy while revealing the man behind most of the greatest cars of that time period.’ Motorsport Online

‘In this gripping memoir, Newey reveals the highs and lows of his race to the top.’ Mail on Sunday Books of the Year

‘The greatest Formula One designer of his – or any other – age.’ Sunday Times

‘Newey has a legitimate claim on the title of "Britain’s greatest living engineer".’ Daily Telegraph

‘Adrian Newey has created more winners than all the super-brain computers in Formula One put together.’ The Times

‘Creative genius… the leading Formula One designer of his generation… refreshingly honest.’ Guardian

‘The most accomplished man in the world’s most glamorous sport… The Michelangelo of motorsport.’ New Yorker

‘If you love finding out how things work, if you’re a car nut, if you’re intrigued by the sport’s politics and even if your interest in Formula 1 is but a passing one, you absolutely must read this book.’ Octane Magazine

‘How to Build a Car encapsulates through Adrian’s remarkable life story, precisely what makes Formula 1 so thrilling.’ Car Mechanic

‘How to Build a Car gives a tremendous insight…fantastically entertaining.’ Daily Express

‘How to Build a Car is an emphatic hit. It’s one of the most enjoyable F1 books I’ve read in quite some time.’ WTF1

‘How to Build a Car is an essential read for all fans of motor racing.’ F1 Fanatic

‘Adrian Newey is one of Formula 1’s finest technical brains… The prose is sharp, punchy… you learn almost without realising.’ Autosport

Adrian Newey OBE is arguably the greatest car designer in the history of Formula One. Newey has worked in both Formula One and IndyCar racing as an immensely successful race engineer, aerodynamicist, designer and technical director. After designing championship-winning Formula One cars for Williams F1 and McLaren, Newey moved to Red Bull Racing in 2007, where he is currently Red Bull Racing's Chief Technical Officer. He has won 10 Formula One Constructors' titles (more than any other designer), helping some of the world's most famous drivers to Drivers' championship wins, including over 150 Grands Prix.
PostTweetShare Share with WhatsApp Share with Messenger
Community Updates
5 Comments
Post a comment