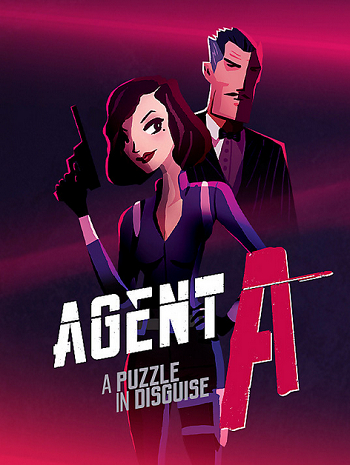 Really great puzzle game IMO with a James Bond motif. This is all 5 episodes for the price. Get deal takes you to Google Play. Both links as follows

Agent A, your new mission is in from headquarters. An enemy spy known as Ruby La Rouge has been targeting our secret agents. Your mission is to find and capture her.

First we need you to follow Ruby, then locate and infiltrate her secret lair. Once inside it is imperative that you uncover her plans.

Oh and agent... do be careful. Miss La Rouge has a taste for dismissing agents such as yourself.

Agent A: A puzzle in disguise is an episodic tale of espionage spanning five chapters:

You play as Agent A, your mission (should you choose to accept it) is to infiltrate the secret hideout of Ruby La Rouge and apprehend or neutralise the target.

Uncover a stylish 60s themed world full of retro futuristic contraptions, hidden gizmos, gadgets and clever logic based puzzles. But do be warned… Ruby La Rouge is no spy to be taken lightly! Explore a labyrinth of perplexing puzzles in this quirky game of cat and mouse that’ll have you wondering whether you’re the cat… or the mouse!!

Notice something strange or out of place?

Making mental notes and observations (like a good secret agent) will aid you in solving tricky puzzles later on. As you explore Rubys secret hideout, collecting objects and using them cleverly is crucial in unlocking a trail of puzzles leading you ever closer to your target!

If you like escape games, you will love Agent A!

One Purchase - No In App purchases.

4.5/5 Apple n Apps "Agent A is an outstanding puzzle adventure that delivers a must have iOS experience."
4/5 Touch Arcade "This is one of the most playable and least frustrating adventure games I've played, and it speaks to the strength of the game design that it is great."
AppUnwrapper "Agent A feels like something really special."

Are you clever enough to outsmart Ruby? Slip into the exciting world of espionage with Agent A now!
PostTweetShare Share with WhatsApp Share with Messenger
Community Updates
Google Play DealsGoogle Play voucher
If you click through or buy, retailers may pay hotukdeals some money, but this never affects which deals get posted. Find more info in our FAQs and About Us page.
New Comment Subscribe Save for later
4 Comments
23rd Dec 2019
One of the best mobile games available recommend this to everyone
Edited by: "LOKKO" 23rd Dec 2019
23rd Dec 2019
Loved this game, highly recommended!
23rd Dec 2019
Heat
23rd Dec 2019
Never heard of it, but buying on everyone's recommendation