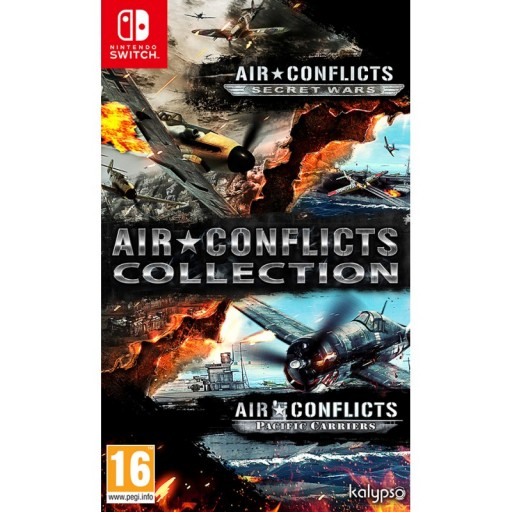 Just dropped a quid on this. DESCRIPTIONPrepare to take the battle to the skies as two of the most popular titles in the 'Air Conflicts' series make their debut on the Nintendo Switch. The Air Conflicts Collection sees arcade flights action titles Air Conflicts: Secret Wars and Air Conflicts: Pacific Carriers come together in one action packed collection, guaranteed to test your dog fighting skills to the limit. Air Conflicts: Secret Wars throws you into action-packed air combat at historical locations of the First and Second World War. Choose from more than 16 different aircraft and fight enemies in breath-taking dog fights spanning seven campaigns. Show everyone you're an ace in multiplayer mode with up to 8 players featuring five action-packed modes.

In Air Conflicts: Pacific Carriers, you will relive the Pacific War in historical battles and original planes that are accurate down to the last detail. Play two campaigns revolving around historically significant aircraft carriers, either for the US Navy or the Imperial Japanese Army and experience the vast scale of a conflict that shaped the history of warfare on the open seas and in the skies. Step into the cockpits of 18 famous airplane types and experience the most famous battles of the Pacific War and fly missions located in Midway, Pearl Harbour, and Wake Island.

I got that and also got Secret Wars for £1.19 last time around
1st Jun
The few reviews are pretty negative. Has anyone around here played these games and are they worth playing? I am trying to resist buying them just because they are cheap...
Edited by: "Ferraz" 1st Jun
2nd Jun