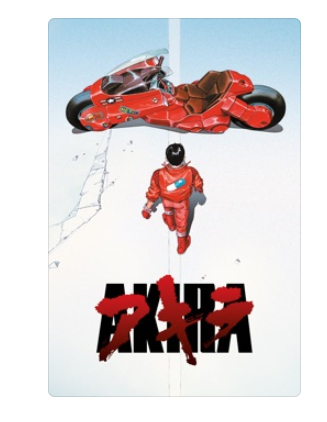 The title does not say 4k, I never wrote 4k bar it has a new master and apple may upgrade it like the normally do.
12th Apr

They just adjusted the title after I reported it. No worries just making it clearer
12th Apr

I bought it on VHS nearly 30 years ago. Around 1992 I think. My first exposure to animé. I bought it on DVD, and on Blu-ray later.
13th Apr
How's the live action of this movie going
13th Apr

How's the live action of this movie going

How's the live action of this movie going

Stopped for Taika to work on Thor 4, which has now been put further back because of this virus I don’t know if he’s done a Mandalorian episode for Season 2, then there was rumours of him directing a Star Wars Movie (which he has since denied he’s doing)

so certainly not for for a long long time if he ever gets back to it, I couldn’t see it being started for 5-10 years from now if not at all, at least not with taika watiti anyway.

There is a new animated series coming though based more on the manga too I think so it should cover more of the stor
13th Apr
Akira, my god, still able to immerse myself in it all these years on.
13th Apr

Exactly the same for me! I also fondly remember buying Guyver: The Bioboosted Armor (12 episodes released 1 per month on VHS) over the year, happy days!!
13th Apr

Only problem with Akira as an entry point to Anime is that its so good you're mostly left disappointed by the rest of the genre
13th Apr
New 4K UHD Blu-ray scheduled for release on 24/04/20.

This is my problem

Do you know any similar standard films ?

Some ghost in the shell is decent & appleseed but ive never found anything on par !?
13th Apr

This is good to know.

I was into my animé, which I used to think was manga because it was all released on the Manga home video label, from the VHS days. I bought all of the original releases. I, along with my friends, was left frustrated knowing that I had watched ALL of the animé available in the UK. Them were the days. If memory serves the first 4 releases were Akira, Venus Wars, Urotsukidoji (which was a real eye opener!!!) and Vampire Hunter D (or something like that).

I'd love to see a live action Akira, but I think I'm more excited for the series. As amazing as Akira is, and it's damn well amazing, it is flawed in the fact that it is just one section of the original manga. It always felt like there was more to the story. The same could be said of a lot of novels to movies, when so much is crammed into 90 minutes.

I only read a little of the manga, back in a similar period where they published various stories monthly. I read a little Appleseed too. Manga didn't get me as excited as animé though, so I'd really like to see more of the Akira story in the series.
13th Apr

But hey, I remember enjoying Venus Wars too. It was crap compared to Akira, but it was great in the fact there was nothing like it in the mainstream over here.

I've enjoyed a lot of animé. I don't think anything will ever beat Akira. If I compared every movie to Akira, I'd never be happy.
13th Apr

I just wouldn't attempt to find anything similar on a par.

Ghost In The Shell and Appleseed are great.. but they're not Akira.

I like my Studio Ghibli films. They're fantastic. I can watch most of them with my kids too. If you'd watched My Neighbour Totoro and you wanted a recommendation I could rattle of a list. That's not to belittle Ghibli, but they have a large catalogue of great films. They consistently produce.

Akira and Blade Runner always got compared. I think for sci-fi, those 2 are out there. 30, nearly 40 years later, nothing animé or Hollywood has had that impact since.
13th Apr

I had Venus as it was PG, but it was cut in the UK

It was many a years later before I was spending a fortune importing Japanese DVDs over to see the originals.
14th Apr

Most obvious similar one is Steamboy but only because it's the same creative team and visually very similar. Other than that it's just down to personal taste I guess - for me Princess Mononoke is fairly epic and dark. Bits of the Gundam Wing universe are good. I also really enjoyed Attack on Titan recently.
15th Apr

I will check these out

AOT was good i watched all of that