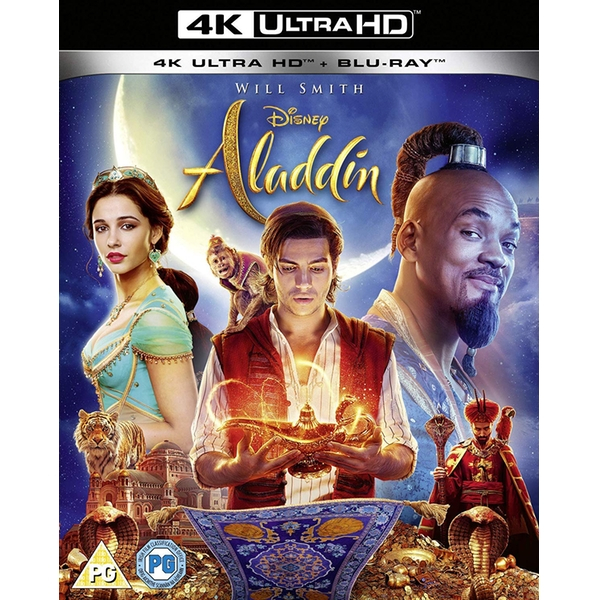 This will make an excellent mothers day movie watch Saw this in the cinema and though it was fantastic movie.


Product DescriptionAladdin (2019) 4K UHD + Blu-rayPlease note this is a region B Blu-ray and will require a region B or region free Blu-ray player in order to play.

From Disney comes the thrilling and vibrant live-action adaptation of the animated classic Aladdin, the exciting tale of the charming street rat Aladdin, the self-determined Princess Jasmine and the Genie who may be the key to their future. Directed by Guy Ritchie, Aladdin features an all-star cast including Will Smith as the larger-than-life Genie, Mena Massoud as the clever scoundrel Aladdin and Naomi Scott as Jasmine, the beautiful, courageous princess of Agrabah.

PostTweetShare Share with WhatsApp Share with Messenger
Community Updates
365games.co.uk Deals365games.co.uk promo code
New Comment Subscribe Save for later
10 Comments
13th Mar
Amazing deal. If it wasn't for Disney Plus being right around the corner I'd be all over that like a cheap suit, but I'm gonna hold off and see what the streaming is like. Thanks for posting, though. Have some heat.
Edited by: "BristolBillyBob" 13th Mar
13th Mar
Hoping these will be 4k on disney+.
But I'm still thinking about it!
13th Mar
Sweet have some heat, just make sure to mute when Will Smith sings
13th Mar
Oos?
13th Mar
bought the last one! Sorry folks.. The old Aladdin 4K from 92 is available for £6.49!!
13th Mar
Just bought it, thanks for posting.
13th Mar
OOS already - "currently unavailable."
13th Mar

Are we? Wonder why they mention it then seeing as they are selling to the UK.
Deleted my comment just looked.
Edited by: "derbree" 13th Mar
13th Mar

Old one is still better.
Edited by: "Raphbatz" 5th Apr