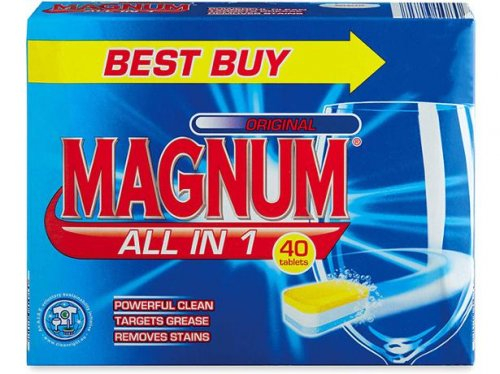 Aldi Magnum All in1 Complete Dishwasher Tablets Original (better than any branded ones according to Which?) - now £3.79 for 40

These Magnum All-in-One Dishwasher Tablets are perfect for ensuring a brilliant shine to all your cutlery, crockery and glassware.

Better than any of the big brands, according to Which? and a fraction of the price.

Now reduced to £3.79 from £3.99
PostTweetShare Share with WhatsApp Share with Messenger
Community Updates
Aldi DealsAldi Discount Codes
If you click through or buy, retailers may pay hotukdeals some money, but this never affects which deals get posted. Find more info in our FAQs and About Us page.
New Comment Subscribe Save for later
14 Comments
11th May 2016
These are good... better, IMO, than Fairy Ultra. Been using those 2 back to back at the moment.

Wouldn't call a 5% reduction a hot deal though!
11th May 2016
After years of only ever using fairy I tried Aldi they washed really well with a nice shine, however I now use Lidl ones as I found the Aldi ones left a chalky substance around the door of my machine. probably due to my machine and hard water area.
11th May 2016
These work out to cost about 9.5p per tablet.
I can get the 'Powerball' thought to be the top of the range dishwasher tablets for 10 for £1 at Poundland (= 10p each).
This is not a deal in my opinion. Cold from me.
11th May 2016

Your choice, of course, but it's by no means 'top of the range' and you're actually paying more for a product that's nothing like as good:

Aldi Magnum Which? verdict: Brilliant on a budget 79%
Pros: Brilliant overall cleaning and great at preventing watermarks, they’ll also keep your glasses clear, wash after wash. Plus, they’re a third of the price per wash of the most expensive detergent on test.
Cons: Plates and dishes may start to look less glossy after repeated washes, compared with other tablets.
11th May 2016
I am buying Magnum Original and they are the best dishwasher tablets I have used.
11th May 2016
I don't agree, leaves my dishwasher white! but yet I use Powerball and it doesn't.
11th May 2016
Now that it's getting more and more difficult to buy dishwasher powder at an affordable price, I might try these.
11th May 2016

​Thanks for the information, I was unaware of this, noted and appreciated.
11th May 2016

Personally I would go by my personal experience and not what which say.And my opinion is that these are not that good at all,powerball gives better results.

TBH I'm shocked that people rave about products from Aldi as recently we done a like for like shop and every product that was meant to compete with the leading brands was utter rubbish.Ive come to the conclusion that the people who say Aldi is great have not tried the leading brands and the so called voted for products are done in such as way that the results will favor Aldi.Its a shame as I'd love to save the money,but not at the cost of quality as that's just defeating the
Edited by: "Biggunspaul" 11th May 2016
11th May 2016

The overwhelming weight of opinion is against you, I'm afraid - despite all your Tesco and Asda deals. Which? is absolutely independent, with no axe to grind at all, and they're also against you. If you choose to overpay for 'brands' that's your choice, of course, but it's hardly an intelligent choice, given that those same 'brands' supply Aldi to very much the same, or better, specifications. Aldi butter, to take just one tiny example, costs 75p and it's the same as Country Life (check the codes if you don't believe me) which costs almost twice as much.

And Which? tested these dishwasher tablets scientifically against Powerball to reach the researched conclusion that they're substantially better. Your opinion is exactly that - an opinion.
11th May 2016

Well I'm hardly going to make up the FACT that in my dishwasher they aren't as good,what would be my reason to lie and pay more ? I live and test the products I buy in the real world,not in some lab so I can sell subscriptions off the back of it.

And what has my previous deals that have been at Asda and tesco go to do with it ? Are you trying to imply I'm somehow not independent because I've posted deals for other supermarkets ? Do the people at Which shop at different supermarkets ? I suspect they do.

What axe do I have to grind ?

Oh and thanks for the insult by saying I'm not intelligent because I buy branded goods.

LISTEN UP EVERYONE,you must buy everything that Which say is best because if you don't you are thick ! You are not allowed choice or an opinion,because if you do then it is wrong,because Which are god.
Edited by: "Biggunspaul" 11th May 2016
11th May 2016

I feel sorry for you if you let a magazine make your shopping basket choices for you,personally I like to make my own decisions.

OH NO - DISASTER!
13th May 2016
These are identical to many supermarket own brand dishwasher tablets which is no bad thing as they are all better than Finish. I can vouch for Which's findings of a build up of film from Finish it is very obvious. The other thing with Finish is after a very short time the dishwasher and the dishes develop an unpleasant smell. This does not happen with Magnum and the other identical tabs in fact the smell disappears after one or two washes with Magnum.