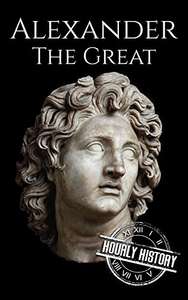 Alexander the Great: A Life From Beginning to End (Military Biographies) Kindle Edition by Hourly History FREE at Amazon

Alexander the Great. A boy, groomed for greatness from the earliest age, who would put his stamp on the world for generations to come. A man who sought immortality and achieved it in just ten years. A soldier whose genius for strategy and tactics is still studied in the modern world. A ruler who understood how to win the hearts and minds of his subjects. This is the story of a Titan of the ancient world, a man who rose but, though he died, never truly fell.

Inside you will read about...
✓ Introduction
✓ The Genius of Philip of Macedon
✓ Alexander, King of Macedon
✓ Conquest of Persia
✓ Gaugamela and King of Asia
✓ The Death of Alexander
And much more!