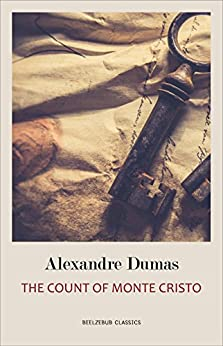 FREE£0.01 Free P&P FreeAmazon Deals
7
Get deal*Get deal*
7Get deal*Get deal*
Posted 15th Jun
Product Description
Set against the turbulent years of the Napoleonic era, Alexandre Dumas’s thrilling adventure story is one of the most widely read romantic novels of all time. In it the dashing young hero, Edmond Dantès, is betrayed by his enemies and thrown into a secret dungeon in the Chateau d’If — doomed to spend his life in a dank prison cell. The story of his long, intolerable years in captivity, his miraculous escape, and his carefully wrought revenge creates a dramatic tale of mystery and intrigue and paints a vision of France — a dazzling, dueling, exuberant France — that has become immortal.

Review
"Dumas was... a summit of art. Nobody ever could, or did, or will improve upon Dumas's romances and plays." --George Bernard Shaw

"From the Paperback edition."

Synopsis
For Edmond Dantes, life couldn't be better. At 19, he is soon to be captain of his own ship and about to be married to his true love, Mercedes. But his life is suddenly turned upside down when on his wedding day he is arrested. Without a fair trial, he is condemned to solitary confinement in the miserable Chateau d'If. Soon, it is clear that Edmond has been framed by a handful of powerful enemies, jealous of his success.

From the Inside Flap
A popular bestseller since its publication in 1844, "The Count of Monte Cristo is one of the great page-turning thrillers of all time. Set against the tumultuous years of the post-Napoleonic era, Dumas's grand historical romance recounts the swashbuckling adventures of Edmond Dantes, a dashing young sailor falsely accused of treason. The story of his long imprisonment, dramatic escape, and carefully wrought revenge offers up a vision of France that has become immortal. As Robert Louis Stevenson declared, "I do not believe there is another volume extant where you can breathe the same unmingled atmosphere of romance."

From the Back Cover
'Before I die, I have my executioners to punish . . .'

About the Author
Alexandre Dumas could have been a character from one of his novels. A true romantic, he was the son of Napoleon's famous General Dumas, a prolific writer of over 277 volumes, a revolutionary and a man of tremendous appetites. He was born on July 24, 1802 and died penniless but happy on December 5, 1870, a refugee from his own excesses.

I love this book

Am glad @robert_bear‌
15th Jun
Thanks - I've never got round to reading this classic before. Downloaded and will hopefully do so soon!
15th Jun

I am glad i posted it on here then, ain't i , @oldcrazy77‌
16th Jun
Too long. I bought this in physical form. Its nicely written, but its too detailed, meaning it would take me about 6 months to read, doing a chapter or 20 minutes reading per night. I didn't find it so enthralling I'd sacrifice the time. Its held in high regard, but I dunno, couldnt get on with it. Its free though, so - there's that.