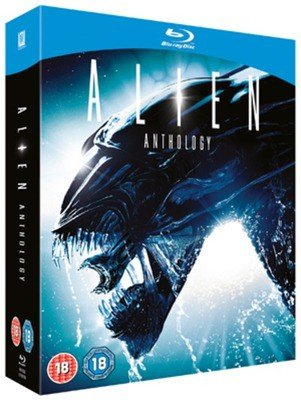 In Ridley Scott's 'Alien' (1979) the crew of a deep-space mining vessel come across something decidedly unpleasant on a mysterious planet. After leaving the desolate planet, they realise that something has survived and is on their ship.

In James Cameron's sequel, 'Aliens' (1986), sole survivor Ripley (Sigourney Weaver) and a team of Space Marines return to the alien's home planet to investigate some mysterious happenings, but soon a new deadly game of cat-and-mouse begins.

In David Fincher's dark and brooding 'Alien 3' (1992) Ripley crash lands on an old prison planet for convicted murderers - but something has hitched a ride with her.

Finally, in Jean-Pierre Jeunet's 'Alien Resurrection' (1997), two hundred years after Ellen Ripley died bearing the Alien Queen, a group of scientists successfully produce clones of both her and the alien. The new Ripley is different to the original in several respects, but some things never change. It is not long before Ripley is forced to team up with a gang of smugglers to repel the acid-blooded killing machines.
PostTweetShare Share with WhatsApp Share with Messenger
Community Updates
Music Magpie DealsMusic Magpie Discount Codes
New Comment SubscribeSave for later
23 Comments
20th May
Amazing bargain!!
20th May
Are these the extended directors cuts? Improved Aliens even more, even just by adding the bloke from Red Dwarf, and made the 3rd one a pretty decent film
20th May
Thanks OP! Ordered.

Looks like a repackaged version of the ones I have and if so, yep. All extended cuts included. The only versions I ever watch
20th May
Went to buy, didn't and then did.... Good price for four decent blurays.
20th May

Two cuts off each apparently going by the same set on Amazon.
20th May
Scone
20th May
Only used left
20th May

Anything I've bought from music magpie has been like new,recently bought The Walking Dead 1-6, 27 disc dvd set for £7, don't think it was ever watched.
20th May
All gone
20th May
My most favourite movies Of all times , good deal heat added
20th May
Expired
20th May
I got the box set of six bluray a few months ago with digital downloads for £10
20th May
For anybody that knows Quad means four, there have never been 4 good Alien films, ok there have never been 3 good Alien films, but let's stick with this deal, that means this is a misprint and people go crazy over that stuff, so buy this while you can because it will be worth at least £1 in 10 years time.
20th May
Just ordered the set, thanks!
20th May
As a massive Aliens fan, I was told by everyone the two recent ones should be avoided. Eventually I watched them and loved them, I thought they were actually awesome. Prometheus is one of the very few films I've cared to watch multiple times.
20th May

Game over man, game over!
21st May

I think Prometheus suffers too much from characters-suddenly-going-braindead syndrome, but I didn't think it was anywhere near as bad as many made it out to be. I prefer Covenant though.
21st May

Prometheus is a bad film, but it's unusual in that it has depth, which is where most bad films fall down right away. For that reason some people immediately identify it as bad, and too quickly dismiss the depth. Others see the depth and assume that it can't be a bad movie.

Alien Covenant though is so bad I can only think of it by its informal title "Carry On Alien".
21st May

Game over man, game over!