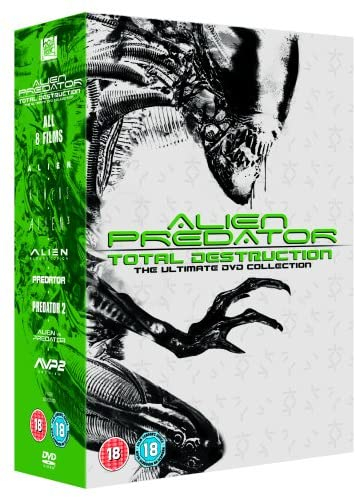 All eight films from the Alien and Predator franchises
PostTweetShare Share with WhatsApp Share with Messenger
Community Updates
Nathan
20th May
In 'Alien' (1979), when Kane (John Hurt) and the crew of the spaceship 'Nostromo' investigate a transmission from a deserted planet, he is attacked by an unknown organism which attaches itself to his face. The crew cut the creature off, but not before it has made Kane the host of a monstrous alien killer, one which will hatch out through his stomach (one of cinema's most memorably gory scenes) and proceed to hunt down the crew one by one.

In 'Aliens' (1986), officer Ripley (Sigourney Weaver), the sole survivor of the alien attack on the 'Nostromo', awakes after 57 years in suspended animation when she is picked up by a salvage ship. She is put to work by the Company, but is horrified to discover that the planet where her ship picked up the original alien has now been colonized. When contact with the colony is lost, the Company send Ripley on an investigative mission with a team of hardened Space Marines.

In 'Alien 3' (1992), Ripley (Weaver) crash-lands on a mining colony planet worked by convicts. While coping with the difficulties of being the only woman on a planet populated by hardened criminals, Ripley comes across evidence that her nemesis, the resilient alien, may have accompanied her there.

In 'Alien Resurrection' (1997), two hundred years after Ripley (Weaver) died bearing the Alien Queen, a group of scientists successfully produce a clone both of her and the alien. The new Ripley is different to the original in several respects, but some things never change. It is not long before Ripley is forced to team up with a gang of smugglers to repel the acid-blooded killing machines.

In 'Predator' (1987), Major Alan 'Dutch' Schaefer (Arnold Schwarzenegger) and a band of mercenaries head into the Central American jungle to rescue some Americans from guerillas. However, there is an additional evil force at work in the jungle, something not human. The mercenaries are picked off one by one and soon Schaefer must face the alien predator alone.
In 'Predator 2' (1990), crime-riddled, futuristic Los Angeles becomes the target of an alien predator, killing drug lords and police alike. A maverick cop (Danny Glover) and a federal agent (Gary Busey) set out to capture the creature.
In 'Alien vs Predator' (2004), billionaire Charles Weyland (Lance Hendriksen) is convinced that his satellite thermal imaging system has picked up evidence of an ancient life form buried under the ice in remotest Antarctica. When a team of archaeologists sets out to investigate, they find more than they had bargained for: the ancient pyramid temple they discover contains evidence that the alien life form it contained could still be in existence.

Finally, in 'Aliens vs.Predator: Requiem' (2007), returning to their home planet with several alien captives and a dead comrade on board, two Predator pilots are killed when an alien hybrid, unknowingly concealed in the body of their dead buddy, bursts forth. Before he dies, however, the pilot manages to send off a distress signal to his home planet, where a Predator receives it before heading off to Earth in response. The spacecraft meanwhile, has crashlanded in the woods of Colorado, spilling its deadly cargo, which immediately sets about culling the local population with extreme professionalism. It's not long before the Predator arrives, unleashing another almighty killing spree, as he tries to stop the hybrid reproducing in quantities that will soon overrun the county.
16 Comments
Post a comment