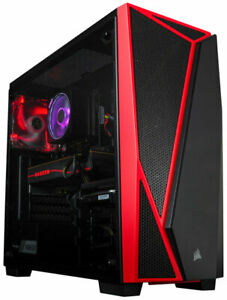 So here we have another Build and another AlphaSync

ive not jumped on to the AlphaSync range as the CCL deals are better.
but ive been asked to strip one down, spec now that the Ebay code is on and this one hasn't been posted.. the 2700x with a 2080 which is just "overkill for alot of folks"..

This build VS Self build prices..

so a build excess in the region of £10 over typical parts.

16GB ram is in single channel is defo their method of clearing excess stock, rather then dual channel.. which is a little better, its not the gods gift its just better.. and alot of prem users will laugh at single channel.. BUT! does make it cheaper to upgrade as u just by another 16gb rather then trying to flog 2x8gbs in order to get 2x16gb otherwise 4x8gbs....

however the CCL has a better PSU when edited to this price range from the post on here and has some much freedom to change everything and has dual channel ram but while the offer in ebay, the ebuyer deal has the upper hand due to the GPU!. unless ur going to o/C the 5700...

Solid spec in an ugly case

you got a point, thats another winner for CCL on the 2700x range and the bonus with CCL they will swap cases just give them a call. CCL2600x/3600x is fantastic.. said from day one the 2700x is very hard with ccl

if its the case which is putting people off give em a call... now i know ud get the usual call centre script down the line...
and this is an ebay one, but end of the day, order it if u want this, give them a call with invoice number..

hi ive had a change of mind on the pc and id like to use my 14 days cancellation policy please based on it being an internet purchase, its just that the specs are fine but the case is after consideration is awe full. - any decent firm no problem what case are u thinking(have a look on their site before hand... ) and have ago at it.. end of the day its not too far away for end of year sales stats... and they dont want a refund on their books.. so its all worth trying.
6th Jan
Why couldn't this be a better CPU. decent specs not the best cpu
7th Jan
Whoops I thought it was ryzen 3
7th Jan
If the board only has 2 RAM slots then I agree on the 1 x 16GB and add another a year or 2 from now. I prefer Supernova PSU but that's personal preference. Storage is on the small side though - a bigger SSD and bigger HDD are not much more money but I guess this can't be customised. Otherwise a good spec for a pretty serious PC gamer with the money to spare.