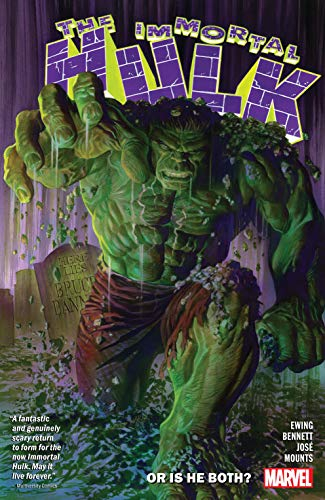 Comixology are having a daily sale and it is showing up on Amazon at the same price.

Horror has a name. You’d never notice the man. He doesn’t like to be noticed. He’s quiet. Calm. If someone were to shoot him in the head…all he’d do is die. Until night falls — and someone else gets up again. The man’s name is Banner. The horror is the Immortal Hulk! And trouble has a way of following them both. As reporter Jackie McGee tries to put together the pieces, Banner treads a lonely path from town to town, finding murder, mystery and tragedy as he goes. And what Banner finds, the Hulk smashes! Elsewhere, the hero called Sasquatch can’t help but feel involved. In many ways, he’s Banner’s equal — and his opposite. Sasquatch is about to risk his life by looking for the man — and finding the monster!
PostTweetShare Share with WhatsApp Share with Messenger
Community Updates
Amazon DealsAmazon discount code
If you click through or buy, retailers may pay hotukdeals some money, but this never affects which deals get posted. Find more info in our FAQs and About Us page.
New Comment Subscribe Save for later
8 Comments
26th Nov 2019
Oh deffo interested in this for 69p,

Edit - oh it’s okay I found the usual sales. And more to come Black Friday as some of the other ones end before Friday & some end Dec 2nd


Never read it but it was written by Al Ewing of Judge Dredd fame & Anything Dredd/2000ad was my go to in my youth, the Americans really liked them too especially D.C (some did marvel too) that's why they poached ALL the best Dredd/2000ad writers and artists from the 80’s/90’s, (some even later as well) during the British Invasion of comics - Grant, Morrison, Moore, Gaiman, Ewing, Steve Dillon (rip), Ennis, Millar, Gibbons, Jock, Ellis Edand we all know what legendary books some of these created.
Edited by: "marc1982" 26th Nov 2019
26th Nov 2019
Is it worth it if you dont really care about comics? Silly question perhaps, but.
26th Nov 2019

Yeah Saw that, the March up to Black Friday sale, Ends Thursday, I don’t know if I should go for the books now or wait until Black Friday as usually with d.c they rarely go below £2.99, but one time some books had up to 90% off I remember that sale on d.c too not just the marvel ones, that said there is also January hopefully for any I miss.

and with these spotlight sales, maybe one book I want will be 69p like this one.
26th Nov 2019

The 90% is more a reflection that this sale reduces some graphic novels from over £20 to £3. I don't think you will see a deeper discount.

If history is any guide they are likely to have a BOGOF sale from Black Friday (including single issues). The best you could hope for is a 60% off sale but they seem to have gotten wise to the fact that they used to offer a discount on an already discounted price. I'm guessing any offer will be based on the RRP (and thus worse than the current one for graphic novels). It would make sense to see what pops up in the daily offers though.
26th Nov 2019
Picked up this and all 12 issues of Sheriff of Babylon (deluxe edition) for £2.99. Hoping for some more good deals and for some Marvel and Image comics to go on sale later on this week!