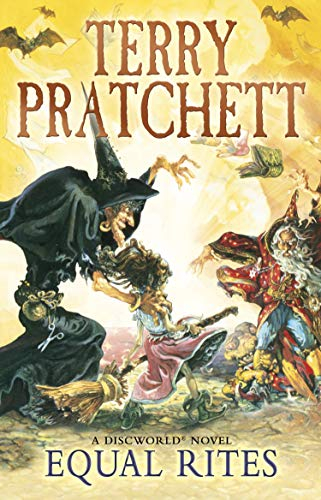 First book in the Witches series.

"They say that a little knowledge is a dangerous thing, but it’s not half so bad as a lot of ignorance.

The last thing the wizard Drum Billet did, before Death laid a bony hand on his shoulder, was to pass on his staff of power to the eighth son of an eighth son.

Unfortunately for his colleagues in the chauvinistic (not to say misogynistic) world of magic, he failed to check that the baby in question was a son.

Everybody knows that there's no such thing as a female wizard. But now it's gone and happened, there's nothing much anyone can do about it.

Let the battle of the sexes begin . . ."
PostTweetShare Share with WhatsApp Share with Messenger
Community Updates
Amazon DealsAmazon discount code
If you click through or buy, retailers may pay hotukdeals some money, but this never affects which deals get posted. Find more info in our FAQs and About Us page.
New Comment Subscribe Save for later
16 Comments
24th Nov 2019
Ah, excellent - another for the Discworld Kindle collection, and it's not even a new month yet. Thanks!
24th Nov 2019
Recently read The Colour of Magic for the first time and really enjoyed it. Surely one of these days The Light Fantastic will be 99p. I guess I'll add this one to the library until that day comes!
24th Nov 2019
Can't wait to finally read it! Thanks
24th Nov 2019
How did you find this so quick? The Kindle Daily Deal page always takes until 12:30 to refresh for me.
24th Nov 2019

You don't have to read Terry pratchetr in orde
r
24th Nov 2019
One of the better books of the Discworld universe
24th Nov 2019
Fantastic author even if you think its not your type of book, buy or borrow and try, you will probably be pleasantly surprised or addicted.
Each year I would buy the latest book when published and keep for festive season
I am now getting on in years and find that I can reread some of the earlier ones and find
something new in the story’s.
Whether this is due to the brilliance of Terry or my failing memory is another story that unfolds as the years pass by lol
24th Nov 2019
Science of Discworld also £0.99
24th Nov 2019

You don't have to read Terry pratchetr in order

You’re right except for The Light Fantastic which follows directly from The Colour of Magic and wouldn’t make sense if not read in order.
24th Nov 2019

It's not just for these two books, but the way that the books work is that there are several mostly independent strands that can be tackled without reliance on the others. Within each 'strand', though, it's best to follow the publication order.

I have my ways!

I know your ways!

That's one! Going through the general deal page (rather than the Daily Deal page) also helps. And you see the book they think is the best at midnight and that is usually the one I post.
24th Nov 2019
@cannibalwombat you don't have to read the light fantastic before this mate. Maby read it before the other witches novels but it doesn't make a massive amount of difference 😁
24th Nov 2019
Brilliant book. Been a fan and collector for nearly 20 years and have some rare copies. Love the whole world that is the disc
24th Nov 2019
Read them all, but can't argue with adding this to the Kindle library at this price