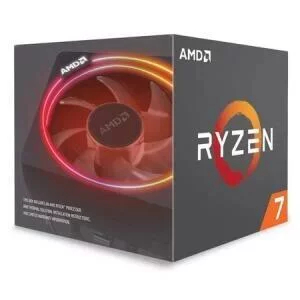 Can now be had cheaper at Amazon: amazon.co.uk/AMD…-21

The new AMD Ryzen 3rd Gen CPUs have arrived boasting higher performance gains over its predecessor lineup. With higher speeds, more memory and wider bandwidth the new Ryzen CPUs look to improve on and upgrade the way you relax, work and play. The AMD Ryzen 7 3700X processor includes 8 CPU Cores with 16 threads and a base clock of 3.6GHz that can be boosted to 4.4GHz. The new CPU's are backwards compatible with older motherboards thanks to the same AM4 slot socket however with the newly released chipset of X570 motherboards you can maximize the power the Ryzen CPUs have to offer. Support for DDR4 Memory continues but with the new Ryzen CPUs comes the new PCIe 4.0 Version which has improved the speeds of which your PCIe components such as graphics cards and some storage solutions communicate with the motherboard. Blur the line between elite gaming performance and workstation-class content creation with the most advanced desktop processors in the world.
PostTweet
PostTweetShare Share with WhatsApp Share with Messenger
Community Updates
EBay DealsEBay discount code
New Comment Subscribe Save for later
6 Comments
10th Feb
Good price but I would just pay a fiver more to get it from a reputable retailer.
10th Feb

This is HotUKDeals my man.

But yeah, Id buy from a better seller for the fiver.
Edited by: "Scramz" 10th Feb
10th Feb

This is HotUKDeals my man.

Indeed and £5 extra for the peace of mind of having a good returns policy if something goes wrong is worth it for me.

Also this has no mention of the free game promotion offered by many retailers, which will sell for more then the £5 extra you paid.
10th Feb

Good price, has dropped £15 since I last checked!
10th Feb

I know, seen that before I have edited the info in the deal so people know