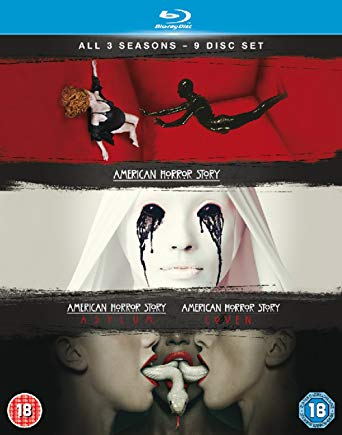 All 38 episodes from the first three seasons of the American horror drama. 'Season One - Murder House' follows the events that befall a family when they unwittingly relocate to a haunted house. Psychiatrist Dr. Ben Harmon (Dylan McDermott), his wife Vivien (Connie Britton) and teenage daughter Violet (Taissa Farmiga) move from Boston to Los Angeles to start a new life after Vivien gives birth to a stillborn baby and Ben has an affair with one of his students. When Ben's mistress subsequently visits him in the hope of rekindling the relationship she sets in motion a chain of events that will have terrifying consequences for all concerned. The episodes are: 'Pilot', 'Home Invasion', 'Murder House', 'Halloween: Part 1', 'Halloween: Part 2', 'Piggy Piggy', 'Open House', 'Rubber Man', 'Spooky Little Girl', 'Smoldering Children', 'Birth' and 'Afterbirth'. In 'Season Two - Asylum', the past and present events at a Massachusetts asylum for the criminally insane are brought to life. At the Briarcliff Mental Institution, run by the Catholic church and its founder Monsignor Timothy Howard (Josephe Fiennes), journalist Lana Winters (Sarah Paulson) arrives to investigate claims of patient mistreatment. It's not long, however, before she finds herself confronting untold horrors as the evil that permeates the building, along with the deranged serial killer known as Bloody Face, begin to make their presence felt. The episodes are: 'Welcome to Briarcliff', 'Tricks and Treats', 'Nor'easter', 'I Am Anne Frank: Part 1', 'I Am Anne Frank: Part 2', 'The Origins of Monstrosity', 'Dark Cousin', 'Unholy Night', 'The Coat Hanger', 'The Name Game', 'Spilt Milk', 'Continuum' and 'Madness Ends'. In 'Season Three - Coven', the descendants of a Salem coven take up residency within Miss Robichaux's Academy boarding school. Run by 'the supreme one' known as Fiona (Jessica Lange), a witch who possesses many powers and abilities, the coven also houses Zoe (Farmiga), who can induce a brain haemorraghe in any man by having sex with him, Madison (Emma Roberts), a child movie star who can move objects with her mind, and Nan (Jamie Brewer), a young girl with down syndrome who can hear the thoughts of others. The episodes are: 'Bitchcraft', 'Boy Parts', 'The Replacements', 'Fearful Pranks Ensue', 'Burn, Witch. Burn!', 'The Axeman Cometh', 'The Dead', 'The Sacred Taking', 'Head', 'The Magical Delights of Stevie Nicks', 'Protect the Coven', 'Go to Hell' and 'The Seven Wonders'.
PostTweetShare Share with WhatsApp Share with Messenger
Community Updates
Amazon DealsAmazon discount code
New Comment Subscribe Save for later
1 Comment
23rd Jan
Orderd thx op bargain not watch any of this so looking forward to it one day.