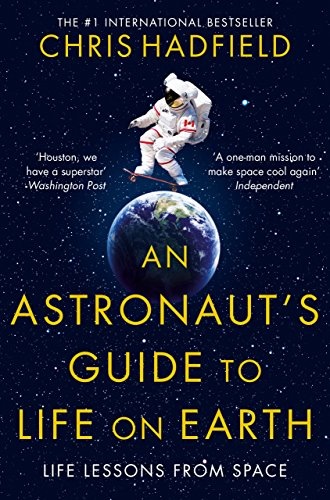 An Astronaut's Guide to Life on Earth 99p at Kindle Amazon

"A very human glance into a rarified world.... The vacuum of space is unforgiving and brutal. Life on earth isn't easy, either. Mr. Hadfield has genuinely and refreshingly increased our understanding of how to thrive in both places."--The Wall Street Journal

"Hadfield is a genius, a man of science and technology and no first-timer to the universe."--New York Post

"Hadfield proves himself to be not only a fierce explorer of the universe, but also a deeply thoughtful explorer of the human condition, capable of articulating those most universal of inquiries in simple yet profound language.... The book itself is absolutely spectacular."--Brain Pickings

"Lessons from his new book, AN ASTRONAUT'S GUIDE TO LIFE, are so inspiring that it's hard to decide which one to tell you about."--USA Today

"Our planet's one-man ambassador to the universe."--Gothamist

"Thoroughly engaging.... In a low-key style, he makes a persuasive case that the oft-derided Space Station is both a marvel of engineering and a triumph for science, and he paints the cartoon heroism of the NASA astronaut corps in a much more realistic, and yet in many ways even more admirable, light."--Corey S. Powell, American Scientist

"Hadfield is a good writer with an engaging style.... From his photos of Earth from space to his videos showing the daily grind of life on a 100-meter wide orbiting tin can, he is all about real life."--Slate
PostTweetShare Share with WhatsApp Share with Messenger
Community Updates
Amazon DealsAmazon discount code
New Comment Subscribe Save for later