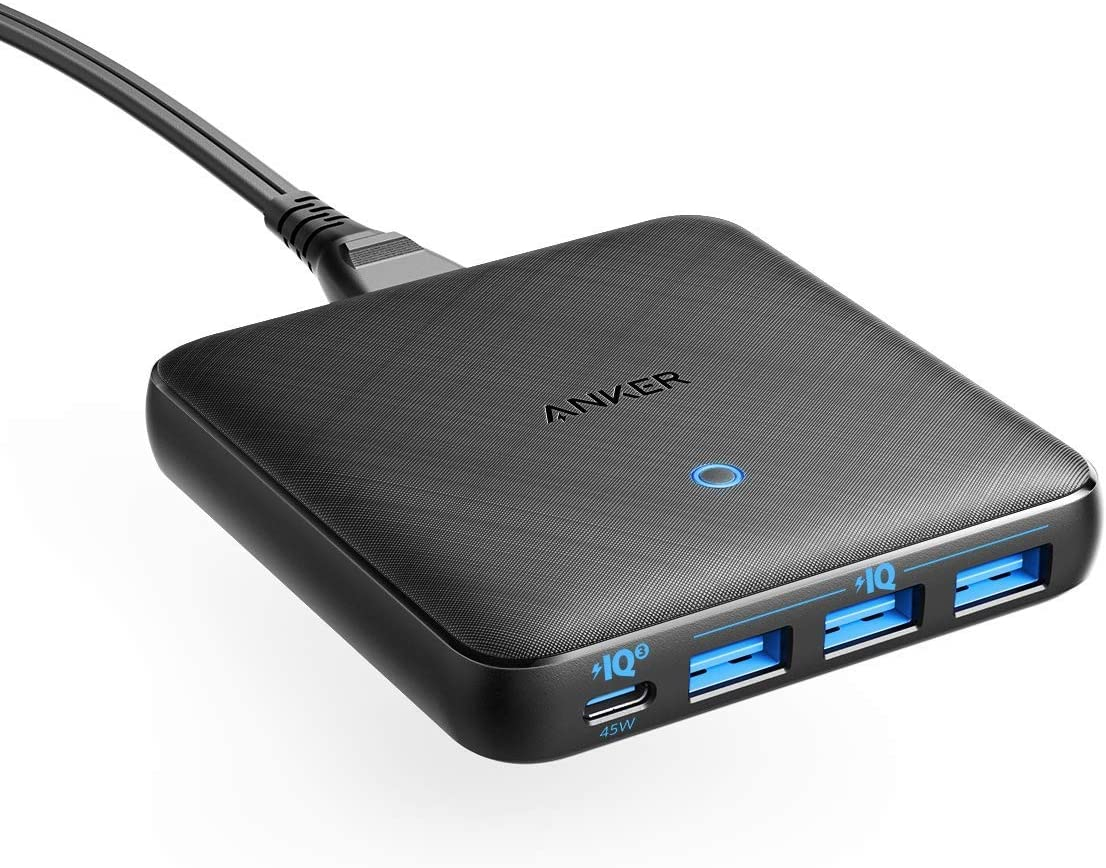 Yes, I've noticed yesterday they changed it to 21st. Not until the 28th. I will check again in a few days, don't need another one, but if i can grab a bargain, why not :)?
22nd Jun

Is there a link to the charger you’re on about?

Edit: found it!
Edited by: "heatedtech" 22nd Jun
22nd Jun
Which USB C to C cable would people recommend? Plenty that seem to do fast data transfer or high power capable, but not many that seem to handle both at once...
22nd Jun

Take your pick out of the Nimaso USB-C to USB-C Power Delivery (60W or 100W depending on your needs) from this list. I went with the 3m 100W Power Delivery myself (paid £7.49 back in March pre-lockdown) which can obviously cope with 18W PD fast charging of a smartphone all the way up to my Ultrabook and long enough that I don’t have to be sat right next to a wall socket.
22nd Jun

Free would have been a sweet deal!
22nd Jun

Thanks, these are among the ones I found but just wondered if there is a decent one combining 100W with 5 or Gbps data transfer. I see a Nimaso one on the list with 60W and 5Gbps so maybe that's the best option.
22nd Jun

Hopefully, @sheffield788 will be along shortly to share his experience after splashing out on that cable...
22nd Jun

I've got the Fasgear mentioned earlier. I was initially going for the Nimaso 100, but decided to spend twice the price on Fasgear, as it was Gen 2 vs Nimaso Gen 1. While the cable is great, I thought the Gen 2 will be faster charging and read/write. It does not make a difference at all. I get exactly the same speed as with Gen 1. Saying this, I get the same speed with a Thunderbolt cable too. 480Mbps, so nowhere near the 10Gbps.
It is not about the cable only, it is about the device too. There are no hard drives supporting this speed. I guess the difference in between Gen1 1 and 2 is when you use it for video, otherwise, IMO no reason to spend twice the price to get something you can't take advantage of it.

The Nimaso ones are on limited deals now, not sure how long left, price starts at £5.99. Note the advertised speed is 480Mbps, but as I said, if it is for charging and transfer files to a hard drive, don't waste your money for a Gen 2, as it is about your device too.
Edited by: "sheffield788" 22nd Jun
22nd Jun

The form factor is fine, is slightly bigger than the Ravpower I have. Because the 'unit' is attached to the cable, I guess size does not matter as much as the ones going straight into the plug.
£16 was a bargain, £14 is even better. Same like you, can't get it why at least one of the 2 usb a ports are not QC 3.0...but I'm happy with my purchase.
22nd Jun

The Aukey? It has a figure of 8 socket so the cable is not permanently attached. Or am I misreading this?
22nd Jun

Not permanently attached. I was referring that some, such as the Ravpower have the plug built on the unit, so the whole unit is plugged, while with the Aukey you only plug a cable. Normally, if it does not have GaN, it could be bulky and take room at the plug. As Aukey has a cable between the unit and the plug, the fact it is slightly bigger than a GaN does not matter to me as it takes the same room at the plug like any other device. It is marginally bigger than my GaN anyway.
Edited by: "sheffield788" 22nd Jun
22nd Jun

Is there a link to the charger you’re on about?Edit: found it!

Can you post a link please, as my old Anker 5 port has died and I can't find this Aukey by searching. Thanks
22nd Jun
amazon.co.uk/AUK…RCY
22nd Jun 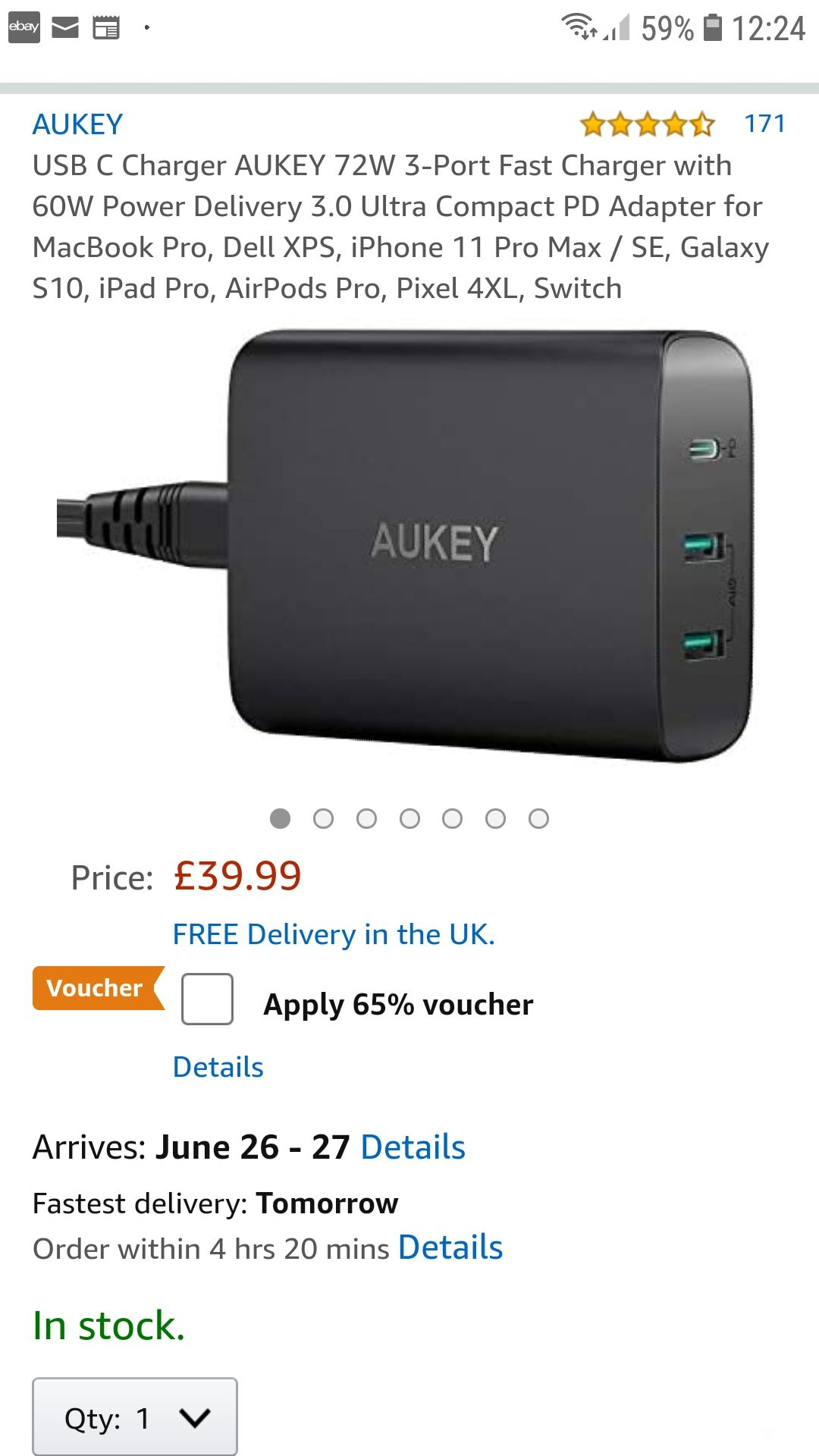 Look in Amazon for this one, cheaper since yesterday, now £14 and great value. Type Aukey 72w in search and bear in mind they are 2, one of them is £41, you go with the £39.99 one and apply the 65% off voucher.
Edited by: "sheffield788" 22nd Jun
22nd Jun
Many thanks guys. Most helpful. Just got to decide if I can get by with just 3 sockets. Mainly used for long holidays abroad and have, 2 phones, Notebook, Gopro, Ipod, Headphones, travel speakers, Kindle etc etc.

I suppose this will be more powerful than my current Anker 40W 5 port, so things should charge quicker?
22nd Jun

They will provided you’re using compatible devices that support USB-C Power Delivery. If not, then the device will usually dictate the maximum safe charging rate that it will draw from the mains charger.

For example, if you have Samsung Galaxy or Note smartphone which accept up to 45W fast charging but require USB-C Power Delivery + PPS which the AUKEY doesn’t support then you won’t be able to get as fast a charge as is possible using the official Samsung fast charger.
Edited by: "cheekster" 22nd Jun
22nd Jun

It's so frustrating that PD introduced even more variables to look out for. I bought two PD chargers before realising they were no use for my Huawei
I'm not confident this one with fast charge the P30 either
22nd Jun

What cable are you using? According to this article it needs to support at least 5A for fast charging a P30. Presumably you’ve toggled fast charging to ‘on’ in the battery settings also?

It seems there are multiple reasons why fast charging might not be working on a P30.
Edited by: "cheekster" 22nd Jun
1st Jul
Wish PD were at least 60w..