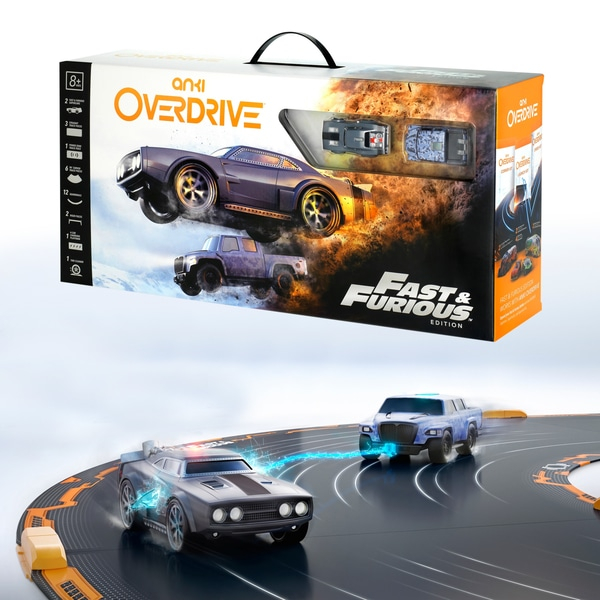 Now you can gear up to race the Fast & Furious family with this Anki Overdrive: Fast & Furious Edition. Use your mobile device to battle the Toretto crew, race high-tech robotic Supercars like Dom’s Ice Charger and Hobbs’ MXT, and upgrade with weapons inspired by the movies. Four character personalities can be chosen, each with their own unique racing and combat elements, making them deadly opponents on the track. DOM is faster than everyone in his Ice Charger. If you win, it’s because he let you. HOBBS drives like he fights, bringing his monstrous MXT down on his foes. LETTY is fierce in a fight and adept at using the loot she wins in battle. TEJ is fast, but prefers to run interference, hacking cars and playing puppet master.
PostTweetShare Share with WhatsApp Share with Messenger
Community Updates
Smyths Toys DealsSmyths Toys discount code
If you click through or buy, retailers may pay hotukdeals some money, but this never affects which deals get posted. Find more info in our FAQs and About Us page.
New Comment Subscribe Save for later
14 Comments
10th Sep 2019
might b worth adding all the extra stuff in your post as its cheap
10th Sep 2019

Might be worth learning where the edit post button is
10th Sep 2019
It's been this price for a while but it's great value. Anki has gone out of business but app works fine. Lovely piece of kit. Heat.
10th Sep 2019

none in stock anyway
10th Sep 2019
5 in Milton Keynes. So sad Anki have gone, this is a lot of fun.
10th Sep 2019
There is one in argos for £39.99 not the fast and furious one but looks as good bought it for my sons for christmas,
11th Sep 2019
Cue one disappointed child come Christmas Day.
11th Sep 2019
Bought the overdrive kit - it worked fine for 3 days and was a good bit of fun. Then one of the cars developed a fault. It would work fine for 2 or three laps and then it would lose connection and go spinning off. Had to send it back in the end. My personal judgement on this is that it's not the most robust of toys and kids wouldn't have the patience to make sure the track is as clean as it needs to be and won't bother cleaning the wheels. My son wasn't too bothered that it was going back, which says it all.
11th Sep 2019
Excellent ordered to add to the kit we already have. My experience is different to the above posters and my kids love it and I enjoy playing it with them too.
11th Sep 2019
My kids have this, paid full price last Christmas. A great toy. Well worth the £50, not had any faults to date.
16th Sep 2019
I must say I bought the Starter Kit for 40 from Argos and the Fast and the Furious kit for 50 from Smyths and my 5 year old and I had fantastic fun racing them most of yesterday.

Managed to get 3 additional cars at Smyths for 15 each despite the site saying there were none.

Would luv to get my hands on the jump or collision track from Smyths but out of stock.

Not quite willing to stomach Argos' full price yet.
25th Sep 2019
If anyone's still thinking about this you can get another £10 off this set at the moment.