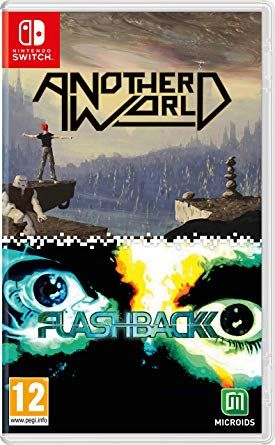 Another World & Flashback Double pack on Nintendo Switch - £29.85 @ Base

For those who don't know or love them......ANOTHER WORLD AND FLASHBACK OFFERED TOGETHER FOR THE VERY FIRST TIME!

Often ranked in the top 100 games of all time, one of the world’s greatest action adventure game is back!

2142, After fleeing in a spaceship, the young scientist Conrad B. Hart wakes up with amnesia on Titan, a colonized satellite of Saturn. His enemies and kidnappers are hot on his heels and he must find his way back to Earth, all while defending himself from various dangers and preventing aliens from destroying the planet.

White or pink? Choose one of the two historic colors of Conrad’s T-shirt

Play any level you’ve completed during the adventure

Replay the cut scenes you’ve watched during the adventure

Remastered music and sound effects
A brand new “Rewind” function which lasts for different lengths of time, depending on the difficulty level

Also known as “Out Of This World” in the United States and “Outer World” in Japan, Another World™ has developed a cult status among critics and gamers for its innovative gameplay and avant-garde cinematography.

Another World™ recounts the adventures of Lester Knight Chaykin, a young scientist who travels through time and space when a nuclear experiment goes wrong. He arrives on another planet, where he will have to fight for survival, surrounded by hostile creatures. He will befriend an alien and only by working together, they will regain their freedom. You’ll need to be logical and highly skilled to overcome this adventure’s obstacles.

3 levels of difficulty: Normal, Difficult (equivalent to the original game’s level) and Hardcore

@Jason Please get someone to sort out the edit function, half the time it doesn't work on the mobile site.
Edited by: "copperspock" 16th Feb
16th Feb
Antiques Roadshow games, I played these on my Amiga 500+ when I was 15... Im now 42. This set should be £9.99 maaaaaaaaaax, in fact they should be ‘free’ with Nintendo Online membership.
16th Feb
decimal point too far to the right IMHO
17 Comments
16th Feb
Two great games but that's a ridiculous price.

@Jason Please get someone to sort out the edit function, half the time it doesn't work on the mobile site.
Edited by: "copperspock" 16th Feb
16th Feb
decimal point too far to the right IMHO
16th Feb
Someone downvoted my two live deals because of that comment, talk about petty XD.
16th Feb
Antiques Roadshow games, I played these on my Amiga 500+ when I was 15... Im now 42. This set should be £9.99 maaaaaaaaaax, in fact they should be ‘free’ with Nintendo Online membership.
16th Feb
F*** reight off with that price.
16th Feb
No special edition packaging?

I don't understand why they couldn't combine them and bring out the ultimate collection.
Edited by: "evosquest" 16th Feb
16th Feb
Trivia: the coldest place in the solar system is the polar region of our moon. Not pluto or uranus, but the moon.

newscientist.com/art…em/
16th Feb
And i thought storm Dennis was bringing in the cold, get your coats people!! Haha
16th Feb
This is probably 5 hours total gameplay. Optimistically.
16th Feb
Lol @ the price of a couple of rehashed games.
16th Feb
You could get both these games up and running on your phone or tablet for free within two minutes and even with pad support (don't ask me how if you don't know I'm sure rules wouldn't allow)
Edited by: "ZX10R_Rider" 16th Feb
17th Feb
Flashback is an amazing game but some of the filters in this version are weird, they allow a crt frame but it's 16:9, and if you tell the game to play 4:3 the widescreen parts are filtered instead of black space, so you get a weird mash of filters that just don;t work together well.

I remember spending that much time on individual levels and giving up (or maybe getting cheat codes from a friend to skip to the next level)
17th Feb
Nintendo sucking blood out of a stone. Fack off
17th Feb
Nice combination.. Really enjoyed Another World.

Had a dodgy copy on floppy for Atari St as a child.. Damn thing used to pause and crash after swinging out on rope first level having been chased by the beast.. imagination running wild..remember waiting 3hours in suspense, to see if the dang thing would still load..

then giving up.. blowing on the disk.. starting again.. Got to second level once..then it crashed again....
17th Feb
I know what you mean. I remember thinking the world's in flashback were limitless, now it's obviously linear. Still great though, I just finished the PS4 port. Shame there's no platinum.
17th Feb
Glad I could at least bring back some memories