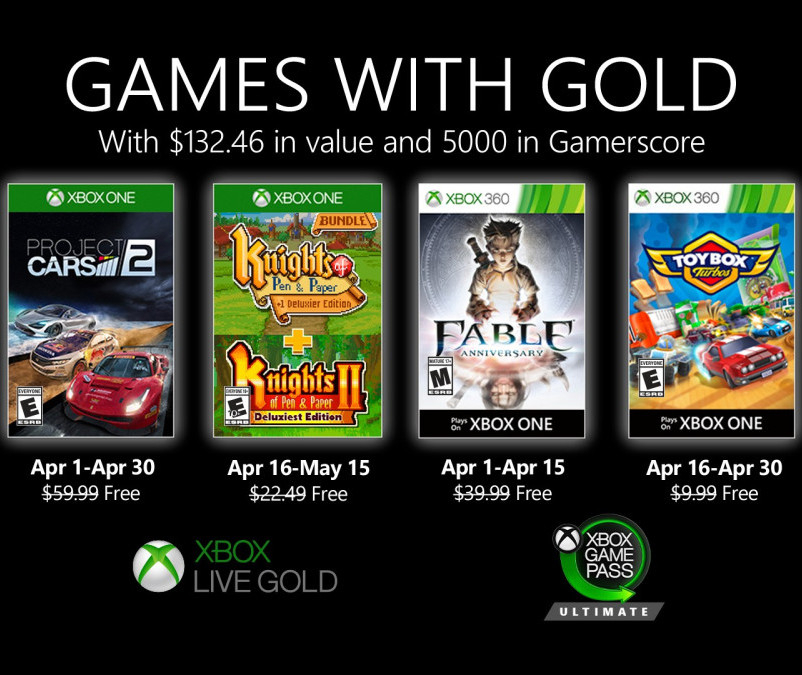 The April Games With Gold line up is here - couple of them already posted earlier tonight. 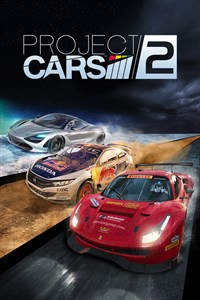 Linky
Over 180 elite vehicles are available for your choosing to compete on a variety of track surfaces including ice, dirt, and mud. Featuring dynamic weather physics on 140 tracks, true-to-life handling, and multiple game modes, the ultimate driver journey begins at the wave of the checkered flag. 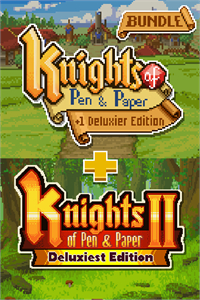 Knights of Pen and Paper Bundle Available April 16 to May 15 on Xbox One
In this collection of the award-winning game and its sequel, inhabit a world of chivalry, class warfare, and semi-appropriate cultural references — while complaining loudly to the Game Master. It’s all the fun of pen and paper RPGs and none of the lost dice! 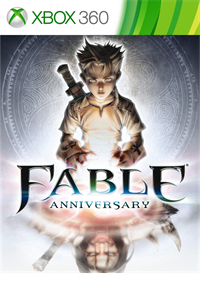 Linky
All new textures, models, and lighting were used to retell the story of the pioneering game where every character choice has a direct consequence. This is the definitive Fable experience for faithful fans and new players alike. 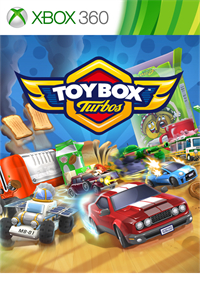 Toybox Turbos Available April 16 to 30 on Xbox One & Xbox 360
Collect and customize 35 vehicles on 18 crazy tracks in a game that reboots the classic table top racing experience. With six gaming modes available and amazing power-ups, it’s the perfect family game for those competitive “just one more” sessions.

Lol true - the better games were certainly posted already
31st Mar
Not fussed, but in a world of Game Pass, I don’t really care about GwG anymore.
31st Mar
With most of us on lockdown, would be working on some of my backlog by now but having learned recently how to get solo lobbies on GTA, getting the cash in whilst I can.
31st Mar
Not a great month for me but it could be for others if kids aren't at school or on lockdown.
31st Mar
I heard that Knights of Pen and Paper was pretty good???
31st Mar
Fable Anniversary is a great game, nice treat for those who haven't played it. Can't say much for the others, although if Toybox Turbos is anything like the old MicroMachine games, then I'm happy Heat added, thanks OP!
31st Mar
I should remember this when my dinner is too spicy. To reduce the heat you just need to add in Knights of Pen and Paper.
31st Mar
Fine with everything but PC2, like the first PC the game is fine with a wheel setup but a complete mess with just a joypad, unless you sit and tweak the settings yourself, as it seems the devs of PC games have never bothered to do on either of these games when it comes to joypad users.
31st Mar

I came to say something like this. A rollercoaster ride of doom
31st Mar
Nice, wanted Knights of pen and paper. Fable already got but it always seemed to crash my 360. Bonus japanese gwg always good and only project cars 2 I probably wont play. Solid month and decent games.
31st Mar

What is the bonus japanese game?
31st Mar
Kind of ridiculous they’ve made a permanent Game Pass game a Games With Gold game, albeit a great one. Along with the 2 disposable games, we’re left with the decent Cars 2, but that’s pretty old now and I’d imagine most people who are interested in racing games have already played it by now.
31st Mar
Not sure if people are aware but Project Cars 2 and Fable are already available to download...
31st Mar
I'll grab pen and paper but this isn't a month for me
31st Mar

Couldn’t agree with you more m8,well said.
31st Mar
I remember when I used to look at Games with Good and smile with pure smugness at the offering over what was given with PS Plus.

I seem to be doing the opposite these days.
31st Mar
Is there a way to see a list of all the Xbox One Games with Gold titles I have accumulated (but not yet downloaded or played)? I have Live on 360 and no XB1 console, but I have clicked the purchase button and ‘bought’ them FREE with Gold...
31st Mar

What is the bonus japanese game?

Asdivine hearts 2 from swapping xbox region location, it's been posted in another deal on here (so in effect with Knights of pen & paper 1 & 2 bundle it's six games this month, almost like the old days of sony ps4/ps3/vita)
31st Mar
Toybox Turbos is ace
31st Mar

What is the bonus japanese game?

Yes, but the joy is, with gold , if you ever drop it and gamepass , you still keep old Xbox 360 or classics you have with gold.
1st Apr
Terrible line up...are they pushing us towards PS5 even more? Come on Xbox, look at the brilliant ps4 game line up for April....now that’s how you do it.
1st Apr

The one thing I do like is that you keep the 360 games even after your subscription expires.
1st Apr

Can you explain the GTA thing bud? Cheers
1st Apr

Yeap, and that is going to pay dividends with the X series and back compat, i like having my library of games come with me from console to console, i like the pc t gaming legacy that MS has with the xbox, great for us gamers.
1st Apr
Knights of Pen and Paper isn't showing up as a free game for me.

Knights of Pen and Paper isn't showing up as a free game for me.Any ideas?

Knights of Pen and Paper isn't showing up as a free game for me.Any ideas?

Wait until April 16th.
1st Apr
I can't add fable as an Xbox fold freebie as it says it's in my gamepass library form 03/07/19. How do I fix that as I want it as a permanent game library?
Edited by: "TALON1973" 1st Apr
1st Apr
Makes me feel better about the supposedly leaked Dirt 2 and Uncharted 4. Decent games if unplayed but both formats are disappointing, for me personally, this month
1st Apr

Can you explain the GTA thing bud? Cheers

If on xbox, load the game up, check the lobby as sometimes you maybe lucky to have your own, if not, just press the xbox button on the controller, setting, network setting, test nat type, continue and press B twice to get back to the game and you should be in a solo lobby
1st Apr
Fable 1 might be my most played game and I haven't ever finished it, mainly down to bad OCD with it and about 50 restarts and then many a hour modding and trying make the whole world a winter wonderland. I might have to go back to it one day and actually complete it this time, no faffing about
1st Apr
Look it’s the Chicken Chaser!!
1st Apr
Great for people with kids.