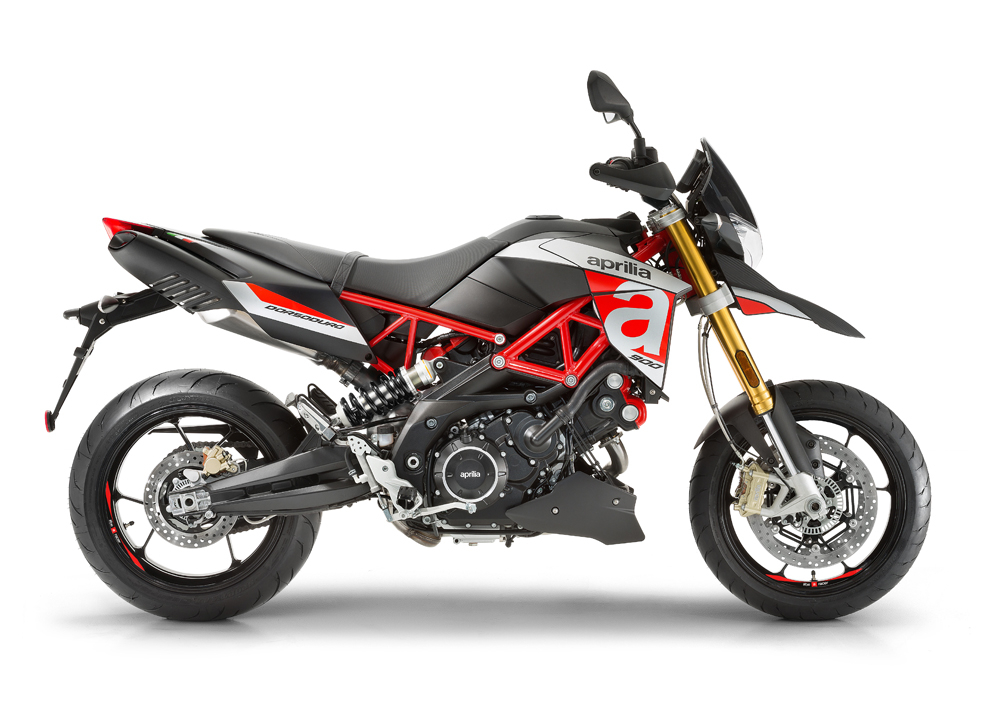 From Motorcycle news regarding the bike

Despite being launched across Europe in 2017, Aprilia UK decided not to import the Dorsoduro 900 into the UK last year. Supermotos are Marmite bikes and it was felt that rather than chance unsold stock languishing in dealers, they simply wouldn’t bring it in. However 2018 has seen a change of heart and the Dorsoduro 900 will soon be landing on our shores, albeit in limited numbers. What has brought this rethink?

Big supermotos have their fans and this niche group isn’t really catered for as in the UK the choice is limited solely to the Ducati Hypermotard 939. Seeing the Ducati’s price tag of £10,795 (or £13,895 for the SP), Aprilia spotted an opening as at £8999 the Dorsoduro is significantly cheaper. Whether this is a wise move has yet to be seen...

Like the Shiver 900, the Dorsoduro 900 gains the same tweaked version of the V-twin that powered the old 750 models. An 11mm increase in stroke and internal modification have seen it not only meet Euro4 without sacrificing its 93.9bhp power, but also gain 6.4ftlb more torque and a healthier mid-range. Add to this an updated ride-by-wire throttle, new exhaust end cans and the introduction of three-stage traction control to go with its three variable fuel maps and the Dorsoduro matches the Hypermotard in terms of tech and very nearly power. You also get lighter three-spoke wheels, revised Kayaba suspension and the Tuono’s colour dash alongside a bit of a restyle, but in truth the majority of the bike is the same as the 750. However the supermoto-style Dorsoduro has one significant alteration that the Shiver doesn’t – revised gearing.

To give the Dorsoduro a bit more attitude, Aprilia removed a tooth from the Shiver’s front sprocket, taking it from 16 to 15-teeth. While this appears a fairly inconsequential change, to ride it transforms the Shiver’s slightly lackluster ride into one with far more zing. And that suits the supermoto’s attitude perfectly.

Perched up high on the flat bench seat, the Dorsoduro feels like a proper supermoto and its chunky bars (complete with brush guards) give an impression of dominating the bike. In the bends it responds well and without too much of that nasty rocking back and forth that you often get on bikes with long travel suspension. The radial brakes are excellent and if the going gets slippery you have the electronic backup of ABS and TC – both of which can be switched off should you wish to play the fool…

Thanks to its revised gearing, in the Dorsoduro the 900 V-twin’s charm is allowed to shine through. Retaining the same light clutch and smooth revving character as the Shiver, the Dorsoduro adds more urgency to accelerate, making it feel fun and a bit naughty, which is what you want on a supermoto. It now responds like an Aprilia, rather than having the hint of a refined Japanese twin like the Shiver. But will it sell?

It’s a very limited market, but fans of supermotos will look at the Dorsoduro’s price and the fact it has a bit of attitude and combined with its updates I think a few will be tempted to part with their cash. It won’t be a great number, but Aprilia already know that anyway.

Torque: 66.4ftlb @ 6500rpm
PostTweetShare Share with WhatsApp Share with Messenger
Community Updates
Onyerbike Deals
New Comment Subscribe Save for later
7 Comments
11th Feb
This is a 2019 model, so they will be desperate to sell this stock. You could possibly negotiate a bit better deal, if you're cheeky enough. 😁
11th Feb
I had a Dorso 1200 and my mate had the 750. They were both brilliant in their own way, sadly the engines were killed off by the emissions laws. I assume the 900 is much the same riding style with the Shiver engine, so nothing much to complain about. My only complaint was range. 90 miles between fill ups. Heat for the price. But there is a pre reg 0 miles one on fleabay for 6999.
Edited by: "airbus330" 11th Feb
11th Feb
Seems like all the bikes these days come with the most uncomfortable seats they can come up with...

This one looks like it'll be 30 miles before you need to take a break so your backside can recover.
11th Feb

Factory Gel comfort seat available, but pricey. I had one on mine and it was worth the expense. Flogged it on fleabay for what it cost later.
11th Feb

Now that should be fitted as standard, but it's another way for them to make even more money...
11th Feb
They have brought back the B.S.A. Bloody Sore Arse. Some one had to do it.
11th Feb

They have brought back the B.S.A. Bloody Sore Arse. Some one had to do it.