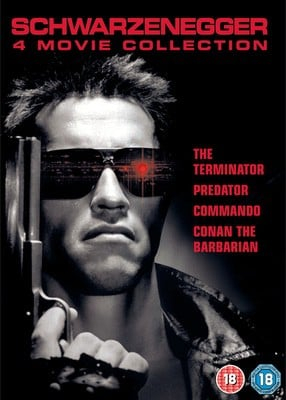 Four-film set of Action adventures with Arnie. 'Predator' (1987) / 'Commando' (1985) / 'The Terminator' (1984), /'Conan The Barbarian' (1982),
PostTweetShare Share with WhatsApp Share with Messenger
Community Updates
Sigma
19th May
'Predator' (1987), has Major Alan 'Dutch' Schaefer (Arnold Schwarzenegger) and a band of mercenaries headinginto the Central American jungle to rescue some Americans from guerillas. However, there is an additional evil force at work in the jungle, something not human. The mercenaries are picked off one by one and soon Schaefer must face the alien predator alone.

'Commando' (1985), John Matrix (Arnold Schwarzenegger), a retired Secret Service colonel, is on the trail of right-wing renegades and a Central American dictator, whom he had once helped to depose. The renegades have kidnapped his eleven-year-old daughter and Matrix is not going to rest until he has her back. This action spectacular was much admired on its initial release due its introduction of humour into a formula which had been played straight up until that point.

'The Terminator' (1984), in James Cameron's much-imitated sci-fi classic a humanoid cyborg from a future dominated by machines (Arnold Schwarzenegger) is sent back in time to kill the mother (Linda Hamilton) of the as-yet-unborn rebel leader John Connor. Meanwhile, the rebels also select an agent (Michael Biehn) to travel back in time and stop the Terminator, thereby ensuring that events follow their pre-ordained course.

'Conan The Barbarian' (1982), Mythical hero Conan (Arnold Schwarzenegger) vows to take revenge after the murder of his parents and destruction of his village. Determined to learn the 'riddle of steel', he sets off with his companions, Subotai the Mongol (Gerry Lopez) and Queen of Thieves (Sandahl Bergman), to kill Thulsa Doom (James Earl Jones), the leader of an evil snake cult. John Milius, who co-wrote the script with Oliver Stone, directs.

Returns policy for Media items
All of our Media items are covered by our quality guarantee. Should you receive an item that does meet this criteria, we'll refund or replace the item in question.
If you feel as though you've received an item that is below our usual standards, please contact our Customer Service Team who will resolve the issue for you - please ensure that include your order number in all correspondence.
Top comments
28 Comments
Post a comment