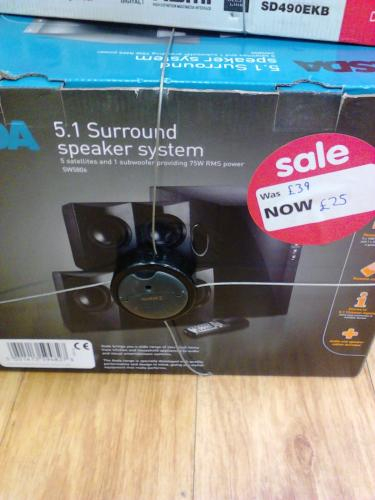 Only had a few of these left on the shelf, colleague said that it was reduced to this silly price due to it being discontinued so there will be some floating about in other stores till its all gone. 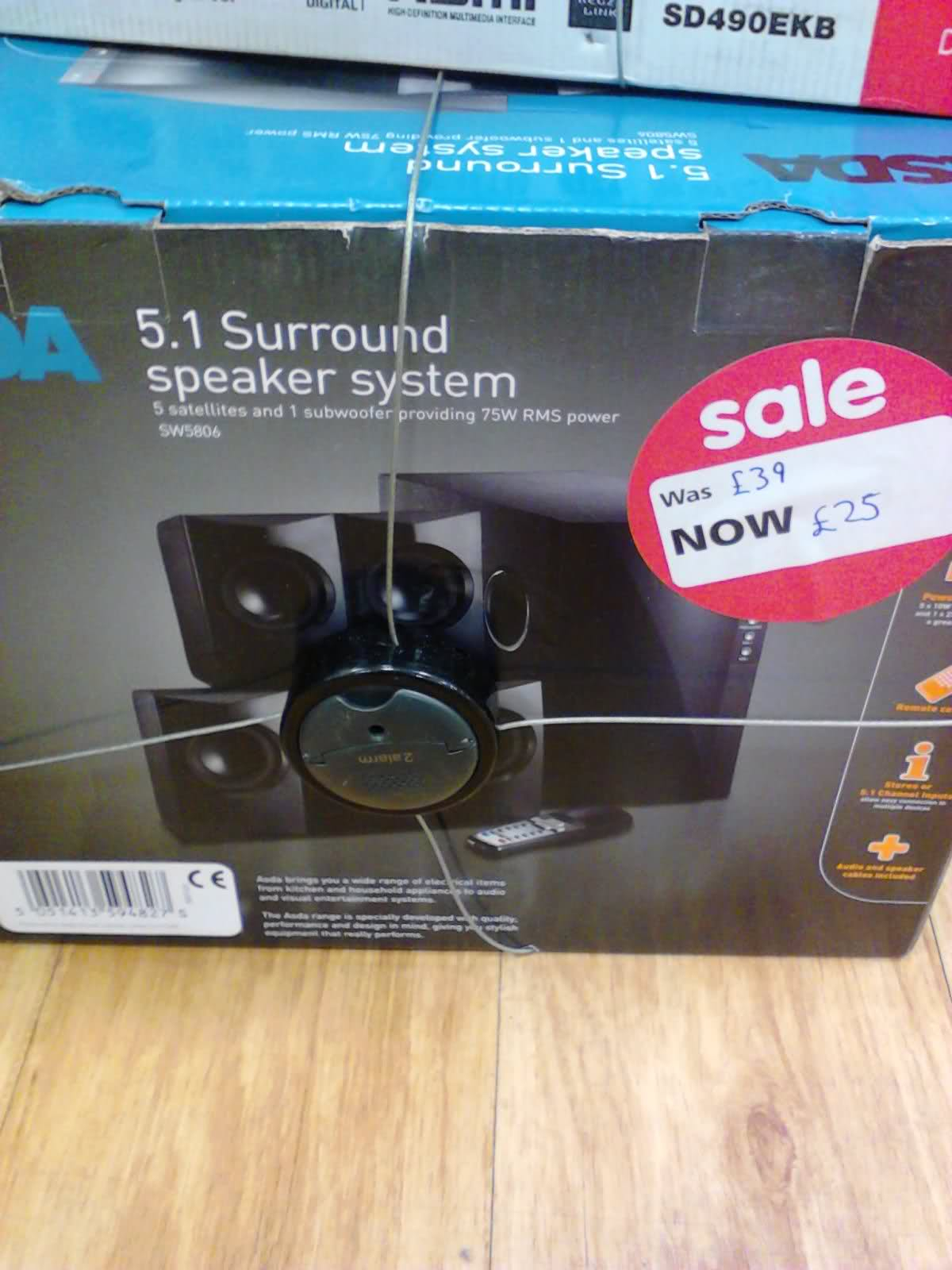 nope dont think it has

deleted53005
29th Jun 2011
I've been using a 5.1 surround sound system I paid £30odd quid for from Asda for the last 6 or 7 years. Works a treat. I suppose someone who is ultra picky will recognise it as a cheap audio system, but really it is far superior to the sound you get straight out of a typical TV and the surround works well enough to trick people into thinking sounds are all around you, so what more could you want. This item looks to be a similar system albeit it in the now more fashionable black finish as opposed to the silver finish that mine has. Very good price if you can find one.
30th Jun 2011
Is this for tv or computer?
30th Jun 2011

I've had them open one of these for me in the past, it comes with RCA cables for the main device and the aux device you plug-in is just 2 RCA plugs, which makes the second device stereo only, it does not have optical and is intended for use with TV's from what I can tell, I decided not to bother months ago.

Is this for tv or computer?

Is this for tv or computer?

Either or I would imagine. Hard to say without a spec sheet but I would guess it'd just be a standard 3.5mm stereo input jack ... 99.9% of them are.

It's not going to match several hundred quids worth of Kef gear (or £150 worth of Yamaha stuff for that matter) but it's £25, it has a remote (many 2.1 systems at this price point don't) and it'll sound better than a flat panel TV.

So unless the sound is utterly, UTTERLY, dreadful from it .... you can't really argue at this price.

Hot from me, and I normally hate cheap hifi gear! The tricky bit is likely to be finding one I suspect ....
30th Jun 2011

I watch films from my PC straight to TV. Straight HDMI to HDMI from graphics card which carries video and audio.

Presumably this will connect straight to the TV's inputs for better sound?
30th Jun 2011

If your TV has a series of RCA outputs this will work, however looking at the outputs on your TV, it only has stereo RCA outputs: 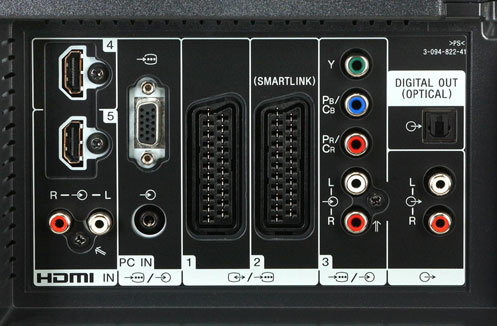 I would expect better sound than just your TV can do, however I wouldn't expect your tv to pass through 5.1, the best you would hope for with this setup is 5.1 stereo (all speakers active with only stereo effects)

Aw poop. Thanks for letting me know. What would you suggest I use for better sound output on my TV then? Something cheap using optical out?

I have a set of bose companion speakers conected to my sony lcd i just use the 3.5mm jack straight in the headphone socket & they sound great, i would think these would work in just the same way
30th Jun 2011
These are not bad speakers i run my PC through them but have had them with my Xbox running through. Deffo a steal at £25 if you want pretty loud, half decent bass'y speakers
30th Jun 2011

There are more examples but on other deals which i can't find
Edited by: "madmikeyb83" 30th Jun 2011
30th Jun 2011
I have these speakers along with the hdmi upscaling dvd player that matched up with them.

Ah well. I did say it was hard to say without seeing the spec. And I was close! Twin RCA is much the same - easy enough to get an adapter jack to go to/from 3.5mm stereo. (for the secondary device)

If you want to hook it up to that Sony TV mentioned above you could do that and get 2.1 or Stereo 5.1 .... either of which would still sound better than the speakers built into the TV. (The TV has twin RCA out for stereo out to an amp/speaker set .... my gf uses them connected to a little 2.1 system.)

Utter crap. (Do you drive a Corsa with the entire boot converted into a giant bass bin by any chance?)

Flat panel TV's generally have pretty terrible built in speakers - there isn't space inside them for anything decent. Even a little cheapo 2.1/5.1 system sounds better than whats in 99% of TV's. So if you don't have £1k to spend on an AV amp and speaker setup, but you want better sound out of your TV, then something like this is better than nothing and pretty good value at this price.

Personally, I use an AV switching amp, floorstanders, surrounds, centre and a sub thats capable of taking out my windows if I tried (I suspect .... never actually pushed it that far).

But my gf uses a little Logitech 2.1 system connected to her TV and it sounds a hell of a lot better than the sound from the TV ..... for not a lot of money. (but still more than these cost!)

So unless these speakers are really, absolutely, utterly, dreadful (and the feedback would suggest they are not) then this is worth having at this price for a cheap sound boost on your TV.
Edited by: "sancheez" 30th Jun 2011

deleted53005
30th Jun 2011
I don't know about these particular speakers, but I use a cheap set I bought years ago, they have left and right RCA in only and somehow they produce 5.1 surround sound (or something that mimics it very well). In films you get sounds coming from behind you like say a helicopter flying onto the scene from behind the camera, and convincing rain sounds which have people checking out of the window because it sounds realistically all around round. I'm not a picky audiophile (if that's the right term) so they suit me fine as I'm sure the ones on offer here would most people. You'll always have people who say you have to buy the best of everything or it's just not worth bothering - each to their own.
30th Jun 2011

so you have home cinema kit like mine and then dare to suggest i drive a corsa with the boot filled?

you might drive a corsa with that **** in the back but i dont.

stand by my comment tho, why bother with this **** save up and buy better kit, even second hand if needs be, you cant polish a **** no matter how much you want to.
30th Jun 2011
I have a couple of these systems as a cheap (they used to be £40 RRP) alternative to the rubbish sound that you get from large, expensive HD TVs. The sound is so much better than the TV and they can be remote controlled with my Harmony One. Here is a pic of the rear in case anyone is wondering how the 5.1 input works.

Simple. Because you won't get decent AV kit for anything close to this price. You might get one half decent surround speaker second hand, but that'd be about it. Even second hand lower end of the market you're looking at a couple of hundred for an amp and 6 speakers .... which is what this is.

A full AV set up and this are not the same things .... at all. Anyone trying to convince themselves otherwise is deluding themselves.

Apologies for the Corsa comment. It was the "go large or go home" comment that triggered it.

which is why i said save up, the guy above your comment got it right false economy, i rather go without for a few months to save for a better system,

goes with anything really, lets take that corsa lol, buy that for a fewq hundred quid or save up for a better car.

most in that situation would save up for a better car so why should household items be any different?

i agree anyone who tries to kid them self there getting a av setup for 25 quid is off there rocker.

but theres no harm posting that although this is 25 quid its not worth the bother and you would be better saving up for something else.

The PS3 only has two DAC's onboard, making 5.1 analog impossible, the only way to get 5.1 out of the PS3 to these speakers is either through an optical to RCA converter unit (it's cheaper to buy better speakers) or plug them straight in to 5.1 RCA outputs on your TV (if it has them)

You sir are a comeback genius lol

Thanks, I was just happy I finally got to use it! X)