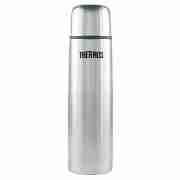 After breaking a number of plastic 1L flasks i decided to get a metal one as I've heard they don't break nearly as easily (broken plastic ones from simply rolling around my car), cheapest I could find the metal ones was £10+ usually not even for 1L ones, while the plastic ones were around the £4.50 area.

Spotted these on rollback and thought they were pretty cheap so bought two. Especially cheap considering the plastic ones were 10p more, and the 0.5L metal ones were only 20p cheaper.
PostTweetShare Share with WhatsApp Share with Messenger
Community Updates
Asda DealsAsda discount code
New Comment SubscribeSave for later
12 Comments

deleted161148
13th Jul 2011
I've got 3 tesco ones and haven't broken any of them yet and we use them at least once a week. Had a similar posh one ( name eludes me) and the plastic top fell apaert and a replacement was £5. These are almost identical.

deleted301914
13th Jul 2011
the plastic ones just seem to be very fragile, quite a few have broke just from rolling around my car, the inside smashes very easily, or that's my experience anyway.
13th Jul 2011
I've got a cardboard thermos, and it's always done me proud!
13th Jul 2011

Probably lost the vacuum between inner and outer.

deleted135249
13th Jul 2011
If you can get one, this 0.5 litre for £1 metal flask, from Sainsburys, would likely be a better deal:
hotukdeals.com/dea…385. Haven't kept upto date with that thread, to know how widespread they are.

deleted153646
13th Jul 2011
In times of rising energy, a good metal thermos by the kettle to deal with the inevitable overfill is a superb idea, a green mate worked out that currently he's saving £6+ per annum simply by boiling up what he thinks he needs & pouring the excess into the metal thermos, then re-heat time when he wants another cuppa is around 20 -30 seconds as the core temperature has remained so high.
I tried it out the other day & am converted, £6.00 is actually alot of Kwh saved potentially, became habit within a day, & frankly ready for cooking / popping out with a prepped thermos to make a tea on the go that hasn't stewed (as it's only storing water)

Ours is keeping water hot for in excess of 24hrs..which is pretty darn good!

I did originally go hunting after seeing that thread, but there's 3 sainsburys around my area, and none of them had them in stock.