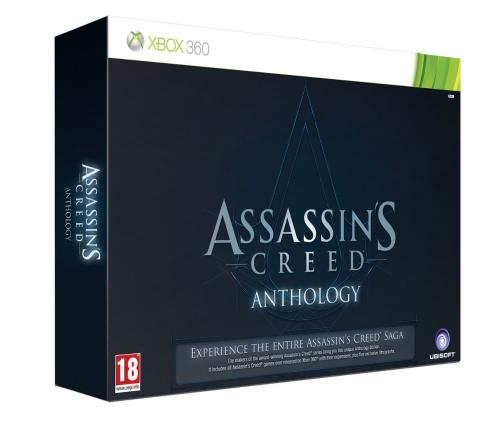 Okay price, but I got it off amazon last month for £45

Fire up the DeLorean!
24th Jun 2013
How is this £96 for the PS3 version? What a rip off...this deal is good though so have some heat
24th Jun 2013
Voted HOT simply as I did not know this boxset even existed.
24th Jun 2013
Basically you're paying for the collectors box, DLC and a few extras.

Collector's Box
Exclusive Steel Book
Five Lithographs
Some (but not all) DLC.
NEW games (not preowned).

People might argue that the games aren't being played online anymore because they're old, but I assure you...they are. The first online game Brotherhood is sometimes difficult to get a game, but eventually you can. Revelations though is very active.
24th Jun 2013

Here's a funny thing: I've never ever played these games online. Are they worth a try?
24th Jun 2013
I just finally after 5 years forced myself to finish the first game in the series! I loved it in the end, i mean the story and the assassinations but not the rest. Really think i might carry on into the series now with this, I always heard the 2nd onwards was good but i could never get into the first.

deleted211730
24th Jun 2013
Online is an amazing experience especially as its kind of just added on to the main game as an extra. The mechanics of trying to covertly kill a target while someone is usually looking to kill you at the same time works really well.

I have completed all the assassins creeds and i would never replay the first or the latest one (american revolution) as they are poor in comparison to the rest.

Fire up the DeLorean!

deleted733638
24th Jun 2013
Not really worth it for collectors as they still make these games. Come November this box set will be incomplete.
24th Jun 2013
this is a good price for this collection, as for other posts about next gen lol,
£15 used for the 4 games good luck finding that if you buy them single you looking at 7-10£ for ac1 like £10 for ac2 £10 for acb and £15 for acr and you are looking 25 for ac3 trust me I own them all and am a long time ac fan this is a very good price for all this amazing content good find op. have some heat
24th Jun 2013
Ac2 will be free for gold members next month.

I'm not sure about this being a deal but its the best price atm for this set so heat.

Never been too sold by multiplayer. It's a bit silly as you find your target and then get killed by your assassin. Maybe I'm crap but it seems to just turn into circular battles as everyone joins in lol. Nice idea though.
24th Jun 2013

Voted HOT simply as I did not know this boxset even existed.

I completed the 1st when it was new but never bothered with the others.

Decided to go through them all again recently from the start. Spoiler free rundown:

The 1st is a good game, but it does feel unfinished in places and is majorly repetitive. What makes it great is the character and setting.

Number 2 however is one of the best games I've ever played. Everything you wished you could do in number 1, you can do in two. The world is so big with so much to do. There's loads and loads of side missions and extras...but here's the thing, you end up actually wanting to do them. I'm a big fan of the TV show, the Borgias, so I really enjoyed the story. Ultimate 'WTF' ending too.

Brotherhood is an improvement in terms of the engine. Some nice new moves make it a bit more fluid, graphics also slighlty better. Only one city this time, but it is very big, and some of the landmarks are breathtaking. Tomb Raider style tombs are also great, and worthwhile doing on the side. The bad is annoying missions that force you to play a particular way.

Revelations isn't as good as Brotherhood. The combat seems slower and the side missions are nowhere near as good. Overall, I found this disappointing compared to Number 2 and Brotherhood.

That's not true. Assassin's Creed 1 and 2 are frequently £2-3 each at Estock/Zoverstocks. Bortherhood and Revelations are £4-5 each.

They've been cheaper than that too. £7 at the moment for Revelations is too much. It's nearly always below £5. AC1 and AC2 were less than £2 each at one stage delivered on estocks. The frequently go down to that price.
Edited by: "Aerobiz" 24th Jun 2013
25th Jun 2013

Cretinous reply with absolutely no punctuation, however your research and mathematics are abysmal. Your long time fandom does not excuse the fact that at this moment AC1 can be bought for £3 used on Amazon, and under £10 for brand new. I'm not sure where you buy your games but I'm glad I do not shop there...
26th Jun 2013
As someone who doesn't buy pre-owned games both due to the impact on small to medium dev's and as a collector who likes to ensure the packaging and disc is undamaged, this is a great deal, as I'd get nowhere near that value individual purchases, and the DLC for all being included is tremendous value in itself- even if you bought them all pre-owned for £25 cheaper, you'd still need to pay £40 odd to get the DLC's, as even if you get the GOTY editions with the DLC included, the codes will probably already have been used.
8th Jul 2013
these are new games so how can you compare a pre owned price to a new game you will not pick these games up NEW for this price.
also amazon vs zovastock sorry never heard of it ill stick with amazon.