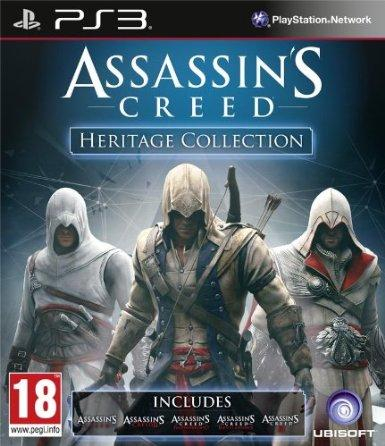 Assassins Creed II (Game of the Year Edition): Lead your Brotherhood as Ezio Audtiore in the Italian Renaissance, also containing the Battle of Forli and Bonfire of the Vanities DLCs.

Assassins Creed Revelations: Follow in the footsteps of the legendary AltaÃ¯r in Constantinople to close the Renaissance Trilogy.

Assassins Creed III: Challenge the Templar's supremacy as Connor throughout the American Revolution.


Just a heads up this only contains the DLC for Assassin Creed 2 and not the other games!
- Pepz347
PostTweetShare Share with WhatsApp Share with Messenger
Community Updates
Amazon DealsAmazon discount code
If you click through or buy, retailers may pay hotukdeals some money, but this never affects which deals get posted. Find more info in our FAQs and About Us page.
New Comment Subscribe Save for later
26 Comments

Yup all of it.

Heat added then as for that price they are a bargain, I just wish they would do these whole collection packs when they have finished the series.

Does this include all the DLC?

Apparently Yeah
7th Oct 2013
Just a warning, this does not include all the DLC, everything I've seen online says to not confuse it with the Anthology which does have all the DLC Shown here and many other places.
According to Ubisoft's site is does include "Battle of Forli and Bonfire of the Vanities DLCs." for assassins creed 2 Ubisoft's Site

I think we was just getting greedy lol
7th Oct 2013

I think we was just getting greedy lol

The extra £100 must justify the dlc to them lol
7th Oct 2013
or not with DLC depends which website you read.

Yea were on about anthology version matey.
7th Oct 2013
You have my seal of approval for this deal

Yea were on about anthology version matey.

was replying to the earlier post but never refreshed and caught up.

8th Oct 2013
Only AC2 has the DLC as its GOTY edition. The rest are standard, but at this price it's a better deal I think?

Considering most of us will have a couple or half the games already it would probably just be better to buy GOTY editions of the missing ones.

Ive dabbled with some of the games but never really got into them. Just seen this and deleted AC3 from my hard drive. Gonna get this and work my way through them.

Anybody know if AC has trophies???
8th Oct 2013
Wish they had ported this to ps4.
8th Oct 2013
Shame it doesn't included all the DLC and Season Pass for the games. Either way the Anthology will soon drop down in price again
8th Oct 2013

A quick look on ps3trophies.org would suggest it doesn't, but I'm not sure. I know it has achievements on Xbox360 (I have all but a couple :p). I like the series but people say it dipped after the 4th game (AC3). I'm waiting for an edition that includes all the DLC before buying that one...
8th Oct 2013

I'm playing through them all at the moment on PS3 and there are trophies on AC2, ACB and AC3. Haven't gotten round to playing revelations or AC1 yet though.

AC 1 does not have trophies. The rest of the games do.
8th Oct 2013
its still cheaper to buy the games separately

its still cheaper to buy the games separately

LOL YEAH!! But at £6 a game brand new in a collection kinda makes this ok matey
8th Oct 2013
Got them all already.....will have to get round to playing them one day

Be nice if they bundled in the Vita version as well.