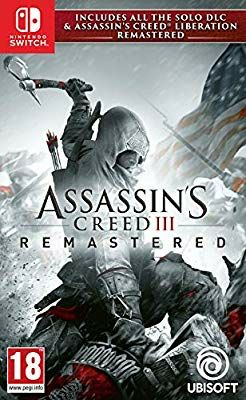 Seems like a good price.
PostTweetShare Share with WhatsApp Share with Messenger
Community Updates
Community support
25th Jan
The year is 1775. The American colonies are about to revolt. You are Connor, an assassin who has sworn to secure liberty for his people and his nation. To do so, you will hunt your enemies across a staggeringly large, open, and realistic world.

Vast Diverse Open World to Explore - Connor's story will allow you to explore unique environments such as Boston, New York, The Frontier and Epic Naval Missions.

Optimized for the Nintendo Switch, Play in TV mode, Handheld mode, or Tabletop Mode.
Argos DealsArgos discount code
New Comment Subscribe Save for later
6 Comments
25th Jan
Same price at Amazon if anyone wants it from there.
amazon.co.uk/Ass…2TW
25th Jan
Ran badly at first but it's a lot better now they've patched it several times. Good deal.
25th Jan
Seems like a good price - think we’re on the same Page
26th Jan
Expired - back to 23.99 (the amaxon one that is)
Edited by: "r8sso" 26th Jan
26th Jan
2 was the best imo, wasn't a big fan of 3, but absolutely loved black flag
28th Jan
Didn't everyone hate this game? I quite enjoyed it when I got it for free a few years ago on pc