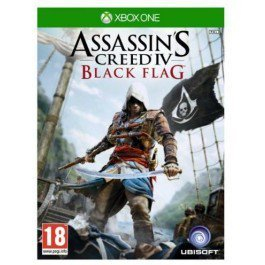 Ridiculous price! Deal was posted a week or so ago and is now available again at £2.99 plus you can get an extra 5% off by liking them on facebook.

The year is 1715. Pirates rule the Caribbean and have established their own lawless Republic where corruption, greediness and cruelty are commonplace.

Among these outlaws is a brash young captain named Edward Kenway. His fight for glory has earned him the respect of legends like Blackbeard, but also drawn him into the ancient war between Assassins and Templars, a war that may destroy everything the pirates have built.
PostTweetShare Share with WhatsApp Share with Messenger
Community Updates
CDKeys DealsCDKeys voucher codes
New Comment SubscribeSave for later
84 Comments
22nd Jan 2015
Does anyone reckon this might be hitting the xbox games with gold or PS+ shortly? I've kind of been holding off recently just in case as I feel it's kind of reaching that point.

Doubt it since it's been such a big part of XB1 bundles. Well worth the price though, I highly recommend it.
22nd Jan 2015

Except for the hours I wasted trying to get into a fort that can't be accessed until later in the story...:(
22nd Jan 2015
£4.27 with 5% facebook discount
22nd Jan 2015
Bargain, it's a pretty frustrating game but if you can get over the fact you have to run in straight lines for maximum success and overlook it making decisions for you when you free run/fight there are some super fun missions!
I suspect it's twice the value of COD Ghosts at less than half the price.
22nd Jan 2015
only problem is ive got no storage only downloaded a few games but really good price
22nd Jan 2015
holy jesus this is cheap
22nd Jan 2015
nooooooooooooooooo I bought it yesterday for £5.80

Other than that I enjoyed what I saw of it but I can't be bothered with the tedious sailing at all.

I thoughT the game was amazing but damn the sailing got boring and by the end of it I was glad to be done with repetitive naval battles.
That being said I played for 50 odd hours and got every achievement so I obviously enjoyed the game overall!
22nd Jan 2015
blimey lol

Assassins creed 2 is one of my favourites. Ezio was a brilliant character
23rd Jan 2015

I've only just hit tulun and I'm taking on man o war ships daily. I kind of ignored the story to build up my ship haha
23rd Jan 2015
Currently playing Unity and must say I enjoyed black flag a lot more, well worth it for this price
23rd Jan 2015

I enjoyed AC 4 more too. Unity is good but the improvements are not worth the lack of enjoyment you get from playing it.
23rd Jan 2015
Heat added!!
23rd Jan 2015

Same, Unity it alright but Black Flag is much more enjoyable. Bargain at this price!