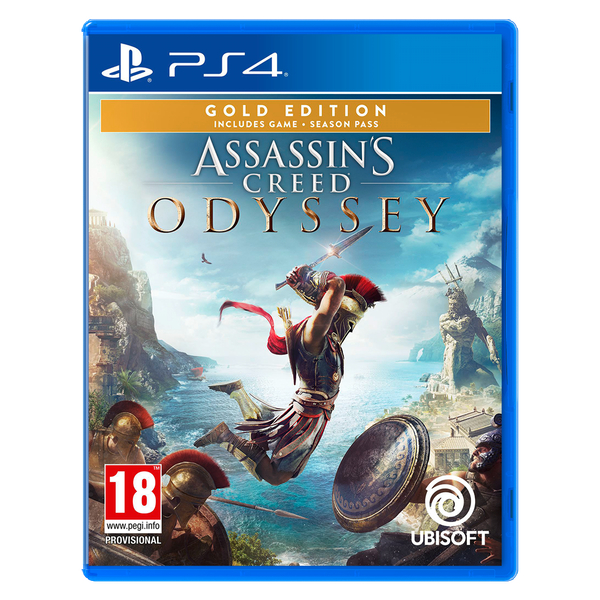 Enhance your Assassin's Creed Odyssey experience with the GOLD EDITION including*:

From outcast to living legend, embark on an odyssey to uncover the

secrets of your past and change the fate of Ancient Greece. Experience

seamless naval exploration, and brand new ways to fight, in a world that

is constantly evolving and reacting as you play.

Write your own legendary Odyssey and

live epic adventures in a world where every choice matters. Sentenced

to death by your family, embark on an epic journey from outcast

mercenary to legendary Greek hero, and uncover the truth about your

past. Forge your path through a war-torn world shaped by gods and men,

player choice to the forefront through innovations never-before-seen in

the world around you. Through the relationships you build with colorful

characters & the decisions you make along your Odyssey,

it is you who is in control of your destiny. Customize your equipment

and master new special abilities, tailoring your hero’s skillset to your

both on land and at sea, to become a true Hero of legend.

I think it comes with AC liberation too

Yes, it will be Assassin's Creed Odyssey on disc and a code for the season pass, which will not only give you all the Odyssey DLC but also Assassin's Creed III Remastered, which includes Liberation Remastered - Liberation being the game that was originally released on Vita as a companion to III (with a story that runs parallel) and was later released on 360, PS3 and PC as Liberation HD. Here it's been remastered in 4K HDR along with III.

With all DLC there's at least 85 hours of gameplay. More like 200 if you're a completionist (going by howlongtobeat).

Add III and Liberation to that and you've got at least 100 hours, up to 250. Crazy value for £30!
16th Jan
Thank you, bought it!
16th Jan
I'm playing this and its a huge game, probably the largest on the PS4, the but is its a huge huge huge grind of samey things.
16th Jan
Thank you for posting; we have added this thread to the Highlights pages