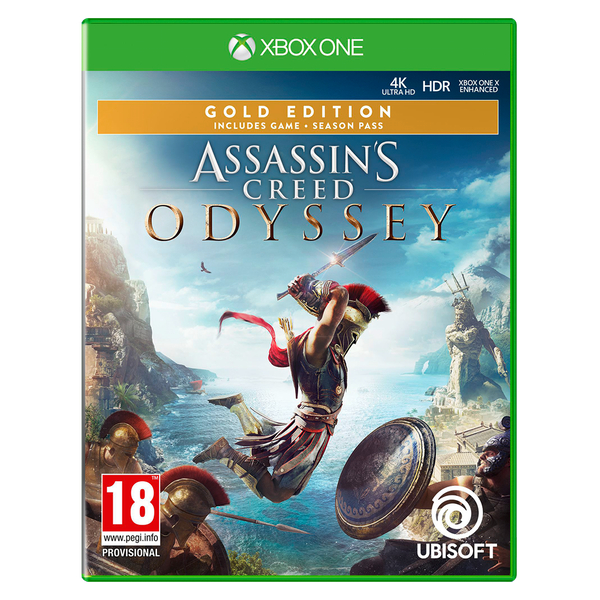 1 in stock ... worth the price for the base game only.
Assassins Creed Odyssey Limited Edition Xbox One Game [Used] £11.28 (2 Available)

Description below is for brand new sealed products and may not represent the item fully. Images are for illustration only. Contents and item condition may vary. All items are sold in working condition. Instruction manuals, guides, downloadable or online accessible content listed on the product, are not guaranteed to be included.

Enhance your Assassin's Creed Odyssey experience with the GOLD EDITION including*:
########NOT SURE ABOUT OTHERS EXCEPT THE GAME##########

From outcast to living legend, embark on an odyssey to uncover the secrets of your past and change the fate of Ancient Greece. Experience seamless naval exploration, and brand new ways to fight, in a world that is constantly evolving and reacting as you play.

Write your own legendary Odyssey and live epic adventures in a world where every choice matters. Sentenced to death by your family, embark on an epic journey from outcast mercenary to legendary Greek hero, and uncover the truth about your past. Forge your path through a war-torn world shaped by gods and men, where mountains and sea collide. Meet Ancient Greece’s famous figures and interact with them during a pivotal point in history that shaped western civilization.

Assassin’s Creed Odyssey brings player choice to the forefront through innovations never-before-seen in Assassin’s Creed as you choose the hero you want to become and change the world around you. Through the relationships you build with colorful characters & the decisions you make along your Odyssey, it is you who is in control of your destiny. Customize your equipment and master new special abilities, tailoring your hero’s skillset to your play style. Fight your way across Greece, engaging in visceral battles both on land and at sea, to become a true Hero of legend.