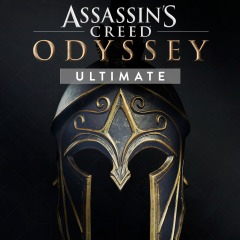 Write your epic odyssey and become a legendary Spartan hero in a world shaped by your choices. Get powerful gear, two new stories across six episodes in the season pass, and Assassin's Creed® III Remastered for 4K and HDR upon its release.

LEGENDARY SPARTAN HERO
Embark on your journey from outcast to legendary Spartan hero.

CHOOSE YOUR PATH
Your choices shape the world around you. Play in a living world that reacts to your every decision.

$29.99 so potentially even cheaper if you can get some cheap US PSN credit. Also includes AC:Liberation
PostTweetShare Share with WhatsApp Share with Messenger
Community Updates
Playstation Network DealsPlaystation Network Discount Codes
New Comment Subscribe Save for later
17 Comments
22nd Apr
Hell of a lot of game for this price. Does anyone know how this runs on a standard PS4?
22nd Apr

Works fine to me I’ve sunk over 100 hours into it so far - the side quests and add on missions are addictive!

The only issue I had a couple of times is it’s frozen momentarily while it auto saves and you’re travelling at speed but it’s not a big problem and rarely happens. It doesn’t affect gameplay.

If your PS3 is running this game no wonder it sounds like a hoover!
22nd Apr
Wow. That's a great price.
For the complete package
22nd Apr
I know nobody has a time machine but this was $22.99 in the US store last month. Just in case you're not desperate to play and buy right now.

Well worth it though - it's a lot of game for the money! Just don't get too hung up on the side tasks that aren't related to the story or you'll never finish it!
22nd Apr

Wish I'd seen it at that price!
22nd Apr
Does this come with the remaster of the vita game too?
22nd Apr

Does this come with the remaster of the vita game too?

Don't see it mentioned anywhere. If no one can find out I'll download it when I've finished work for the day and let you know.

Edit: it does come with liberation as well, the below is from the Season pass description.

Oh sweet, that's settled that then.
Cheers for confirming
22nd Apr
Hmmm very tempting! Last time I played AC was on my PS3 - nice games albeit a bit repetitive after a while. I might go for this, it’s an excellent price - but I have a preference for physical media rather than downloads.
22nd Apr
Hi guys, how do you purchase from the US? Do you use a VPN service or create a US account? Just tried to get this but won’t let me. Thanks.
22nd Apr

I'm sure someone will post a link to a guide on how to do this but basically create a new PSN id on the us site, buy however much you need in US PSN credit (loads of deals for this on the site). Add the credit to your US account and proceed with the purchase. Next sign out of your UK profile on your PS4 and sign in with the US id. Finally go to the store and download your purchase, once its downloading you can sign back into your UK id and play as normal.
22nd Apr
Thanks! Much appreciated! Will give it a go.
23rd Apr

Thanks again for your help, I managed to get it after following your advice. Getting US PSN credit was tricky, but finally got there. Amazon.com wouldn’t let me buy, I then tried pcgamesupply but the mobile phone verification wouldn’t work. I finally tried cdkeys and managed to get $50 - I used PayPal to pay with Halifax Clarity and it cost me £39.60. Now I have another $20 in my US account, to be used in the future.
29th Apr
This has gone back up to 120 bleeding dollars