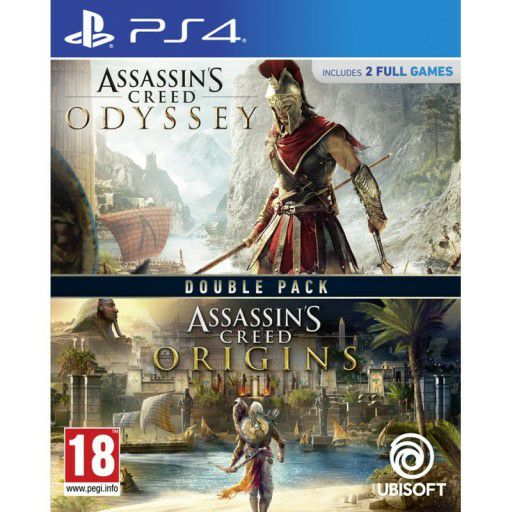 « The Best The Series Has Ever Been » IGN
Write your own epic odyssey and become a legendary Greek Hero in Assassin’s Creed® Odyssey, an inspiring adventure where you must forge your destiny in a world where every choice matters. Influence how history unfolds as you discover a rich and ever-changing world shaped by your decisions.

Assassin’s Creed® Origins is a new beginning. Experience a new way to fight while exploring the Great Pyramids and hidden tombs across the country of Ancient Egypt. Live emotional and memorable adventures along your journey, and discover the origin story of the Assassin’s Brotherhood.

Game Features
PostTweetShare Share with WhatsApp Share with Messenger
Community Updates
The Game Collection DealsThe Game Collection promo code
If you click through or buy, retailers may pay hotukdeals some money, but this never affects which deals get posted. Find more info in our FAQs and About Us page.
New Comment Subscribe Save for later
Top comments
16th Oct 2019
Buy this for someone you don't want to see for 300 hours+, cos that's how much content is in these games. Ace games. Play Origins first.
24 Comments
16th Oct 2019
Are both games on disc do we know?
16th Oct 2019

Are both games on disc do we know?

Ive not heard anyone complaining so I would assume they are

Ideal. Thanks for coming back to me.

Im still after these two, hoping this drops to at least £25, almost got Deluxe for Origins
16th Oct 2019

Yeh they seem pretty good, my mate said once you play Odyssey you cant go back as the controls and gameplay are better, so makes me want to finish the others before buying just incase hes right
16th Oct 2019
Buy this for someone you don't want to see for 300 hours+, cos that's how much content is in these games. Ace games. Play Origins first.
16th Oct 2019

Origins had the better environment setting being in Egypt for me than Odyssey's Greece. However I thoroughly enjoyed both games but I agree Odyssey was the better of the two overall. Origins must be played first though, only then can you see the changes they made in Odyssey. Hours of gameplay to be had in both games.
17th Oct 2019
Playing both games back to back, i couldnt think of something worse, i enjoyed both of them, but honestly after origins i actually needed a break from RPGs. To be fair i did play to 100% completion. Origins was just about bearable grind for everything, odyssey was too much. i feel both games would be better if a bit more linear and not as long. Odyssey i loved for 40 hours but begain hating it 40-60 hours in, eventually gave up near the end. If your going to get this i suggest playing in small chunks or you will get burnt out for sure. Also avoid if your an OCD gamer like me who has to do everything lol
Edited by: "steviep93" 17th Oct 2019
17th Oct 2019
Both awesome games 100s of hour of great content the dlc in both games is like a whole new game on its own
17th Oct 2019

I have played assassin's creed Odyssey for over 161 hours and loved every minute of it was sad to complete set
17th Oct 2019
Will wait for OUTER WORLDS thanx but HEAT(devil)
17th Oct 2019
Do I need to play any previous games in order to play this?
17th Oct 2019

Do I need to play any previous games in order to play this?

Not really, You could play the whole series to learn about the templars but i don't think it's majorly important
17th Oct 2019

Do I need to play any previous games in order to play this?

Does this contain all DLC?

No, but honestly, you don’t need it. As others have said, both games are easily 100+ hrs of content each.
17th Oct 2019
Played both. But did want I shouldn't do and played Odyssey first. It became very boring and samey early on for me. I have played all AC games. Played (and still playing Origins) and I am enjoying it much more than I did Odyssey and I haven't become bored with it all yet, and played it for far longer than Odyssey. Black Flag best of the whole lot - again my opinion of course.
17th Oct 2019